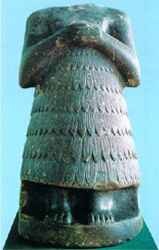 On July 25, 2006, Immigration and Customs Enforcement (ICE) announced the recovery of the statue of King Entemena of Lagash, one of the most significant pieces looted from the Iraq Museum in 2003. It was returned to the Government of Iraq at a ceremony in Washington, DC.

IF YOU HAVE ANY INFORMATION CONCERNING THESE WORKS OF ART OR CIRCUMSTANCES OF THESE CRIMES, PLEASE CONTACT YOUR LOCAL FIELD OFFICE OR THE NEAREST U.S. EMBASSY OR CONSULATE OR SUBMIT A TIP ONLINE.