Community outreach is about building partnerships locally and nationally that help prevent crime and protect our diverse nation.

Read about the FBI’s latest outreach initiatives, notable outreach activities and successes by Bureau partners and personnel, advice for staying safe from emerging threats and scams, career opportunities, and more.

Each year, millions of elderly Americans fall victim to some type of financial fraud or confidence scheme, including romance, lottery, and sweepstakes scams, to name a few. Criminals will gain their targets’ trust and may communicate with them directly via computer, phone, and the mail, or indirectly through the TV and radio.

“If it can happen to me, it can happen to you,” warns former FBI and CIA Director William Webster in a video message that urges older people and their loved ones to be wary of elder fraud schemes.

The 98-year-old retired judge and his wife Lynda were prospective marks in a Jamaican lottery scam in 2014 when an unsolicited caller informed Webster he won a sweepstakes. To collect his winnings, Webster was told he needed to pay $50,000. When the couple declined repeatedly, the caller became abusive and threatening. They called the FBI and worked with special agents in the Washington Field Office to nab the scammer, who is now serving time in prison.

The PSA includes archival images of Webster as a Navy officer in World War II and Korea and later as a federal judge and head of the country’s premier intelligence and law enforcement agencies. The scammer who targeted the Websters didn’t know this background, just that Judge Webster was older and might therefore be susceptible to cons that prey on traits like trustworthiness and loneliness.

In addition to the new PSA, field offices around the country are sharing information about fraud schemes with older Americans by providing briefings, hosting virtual events, and distributing brochures. Recently, FBI El Paso held one-hour presentations in collaboration with Harvest Christian Center to inform the elderly community about how people are targeted and ways to minimize the risk of becoming a target. More than 500 people attended the sessions to learn what to do if they think they have been victimized.

If you believe you or someone you know may be a victim of elder fraud, contact your local FBI field office or submit a tip online with the FBI’s Internet Crime Complaint Center at ic3.gov.

The former director of the FBI and CIA is warning older people—as well as their loved ones and caregivers—to be aware of elder fraud schemes. “If it can happen to me, it can happen to you,” says Webster, 98, who was the target of a lottery scam in 2014. 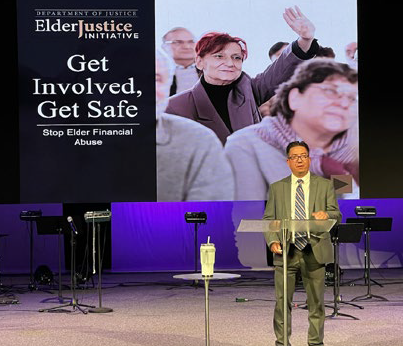 FBI Charlotte Special Agent in Charge Robert Wells and other Charlotte employees recently visited the gurdwara in Charlotte. Wells shared information on hate crimes and ways the Bureau can increase diversity within its ranks.

The FBI is making significant strides in reaching out to members of the Sikh community. Staff assigned to the Community Relations Unit at FBI Headquarters have been working with the Sikh American Legal Defense and Education Fund, a national Sikh American media, policy, and education organization. SALDEF’s mission is to empower Sikh Americans by building dialogue, deepening understanding, promoting civic and political participation, and upholding social justice and religious freedom for all Americans.

In June, personnel from SALDEF traveled to FBI New York to host two cultural awareness training briefings. More than 50 employees attended the in-person presentations, which discussed topics like Sikh articles of faith and cultural and religious considerations when interacting with Sikhs.

Following the training seminar, FBI New York staff were invited to the Sikh gurdwara in Queens. Anyone, Sikh or not, can stop by the gurdwara to enjoy a meal. After visiting the gurdwara, FBI staff traveled to a local restaurant, where members of the local Sikh community discussed outreach programs, recruiting, and child internet safety.

Community outreach specialists across the country are also heavily involved in outreach efforts to the Sikh community. Bureau personnel from New Haven attended the Sikh Independence Day Celebration and Flag Raising Ceremony in Norwich, Connecticut. While there, they were honored with the “Outstanding Community Partner” from the World Sikh Parliament.

In Charlotte, SAC Robert Wells and other Bureau employees visited a local gurdwara, where Special Agent in Charge Wells spoke to members of the Sikh community about how the FBI investigates hate crimes. Additionally, the group discussed the Bureau’s commitment to maintain a diverse and inclusive workplace that integrates equity across the entire organization. 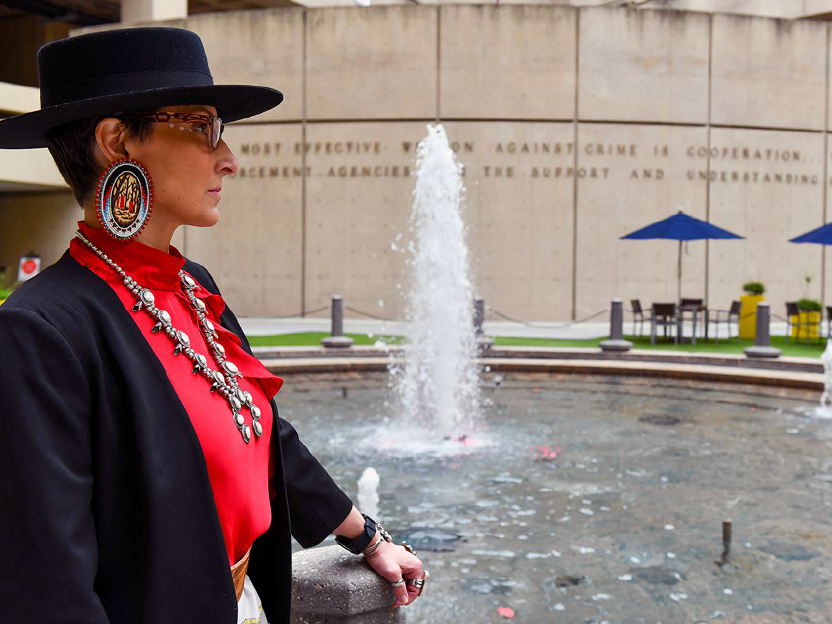 FBI Headquarters held a special ceremony May 5 to honor missing or murdered Indigenous people. Attendees were encouraged to wear red in remembrance of the victims. 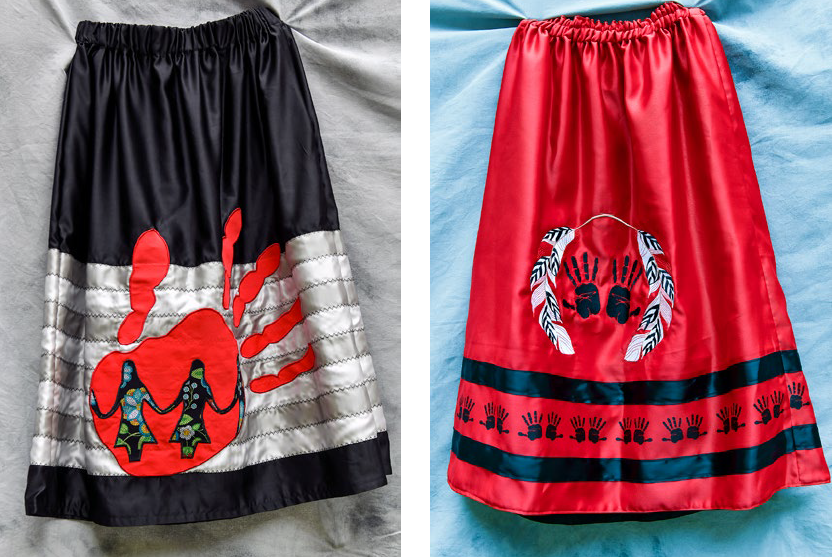 Native American and First Nation artists crafted the ribbon skirts for a Bureau employee in honor of their advocacy for missing or murdered Indigenous people. The skirts are embroidered with colors and symbols to show solidarity with MMIPs.

On May 5, the Criminal Investigative Division (CID) and the Victim Services Division (VSD) held a special ceremony to honor missing or murdered Indigenous people (MMIP) at FBI Headquarters. More than 100 attendees wore red, and the courtyard fountain lights were turned red in remembrance of the victims.

The FBI investigates the most serious crimes in Indian Country and is an active member of the Department of Justice Steering Committee to Address the Crisis of Missing or Murdered Indigenous Persons.

The FBI’s CID and VSD have dedicated investigative and intelligence personnel and victim specialists to the Indian Country Special Jurisdiction Unit.

The ceremony included a traditional blessing from an FBI Native American elder, followed by remarks from CID and VSD leaders. The victims and their families were remembered with a moment of silence.

During the ceremony, employees were able to view two traditional ribbon skirts given to an FBI employee in honor of their MMIP advocacy. The skirts are adorned with traditional ribbon work, which a guest speaker said was adopted by Native Americans by the early 19th century. However, some traditional clothing was regulated until Congress enacted the American Indian Religious Freedom Act of 1978.

Many tribes believe that red can be seen by their ancestors who have passed on, and it evokes a sense of love, peace, violence, and good luck. During the ceremony, the skirts featured red, as did the programs and memorial ribbons. At the conclusion of the ceremony, an FBI Native American elder provided a blessing in the Seneca language.

Beginning in the 2022-23 school year, the FBI will be partnering with the U.S. Army’s Junior Officer Training Corps (JROTC) Cyber Pilot Program to prepare a new generation of cyber professionals considering a career in cybersecurity with the military or in government, academia, or industry.

The program embraces the importance of motivating young people to become better citizens no matter how they choose to serve. Additionally, this program creates a cross-collaborative partnership to support the FBI’s overall workforce development strategy as it relates to recruiting future cyber professionals.

On June 16, members of the FBI’s Community Relations Unit traveled to Huntsville, Alabama, where they met with JROTC instructors from 11 high schools as well as officials from the U.S. Army and the University of Alabama in Huntsville. 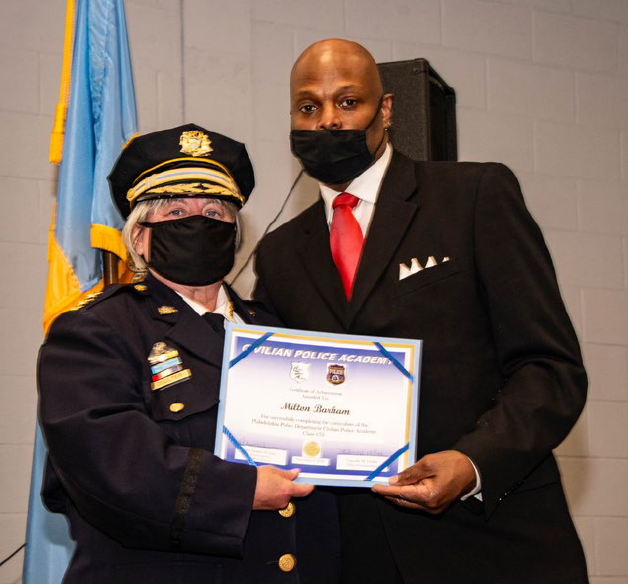 This prestigious program, created in the mid-1990s, is held twice yearly and generally includes 15-30 participants.

“This Civilian Police Academy has given me the opportunity to understand, train, and educate our communities regarding community policing and bring an awareness to the diverse population and neighborhoods of Philadelphia,” Barham said.

Start Your Career with Impact

As the nation’s top law enforcement organization, the FBI offers valuable work experience for students at various education levels. With a variety of programs and internships, we seek students who will bring their knowledge and skills to our diverse workforce.

The Bureau’s 10-week Honors Internship Program is the perfect opportunity to set your career in motion. The paid internship can be a direct pipeline to fulltime employment after college for undergraduate students between their junior and senior years and graduate students pursuing a master’s degree, JD, or Ph.D. This is a unique opportunity for students to learn and work alongside our professionals.

Honors interns are given challenging and rewarding assignments that expose them to investigative and business operations while growing their professional network. 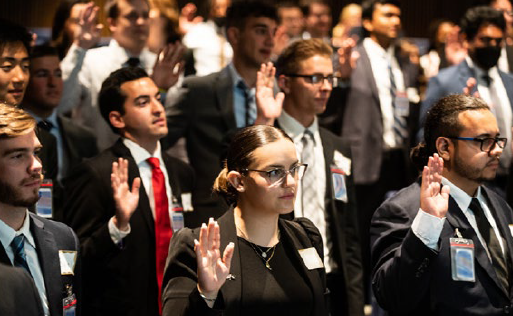 The 2023 application process is scheduled to start in August. Please visit www.fbijobs.gov for the most up-to-date information.

To qualify for the Honors Internship Program, you must: 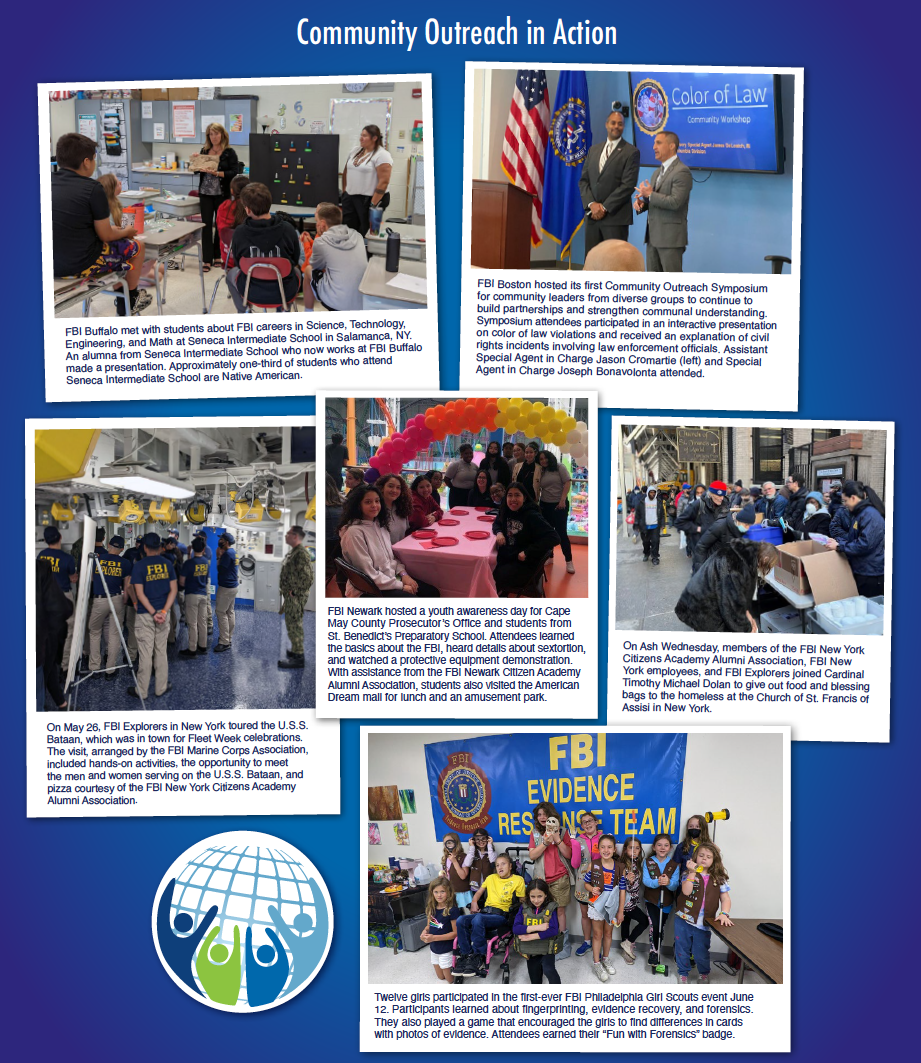 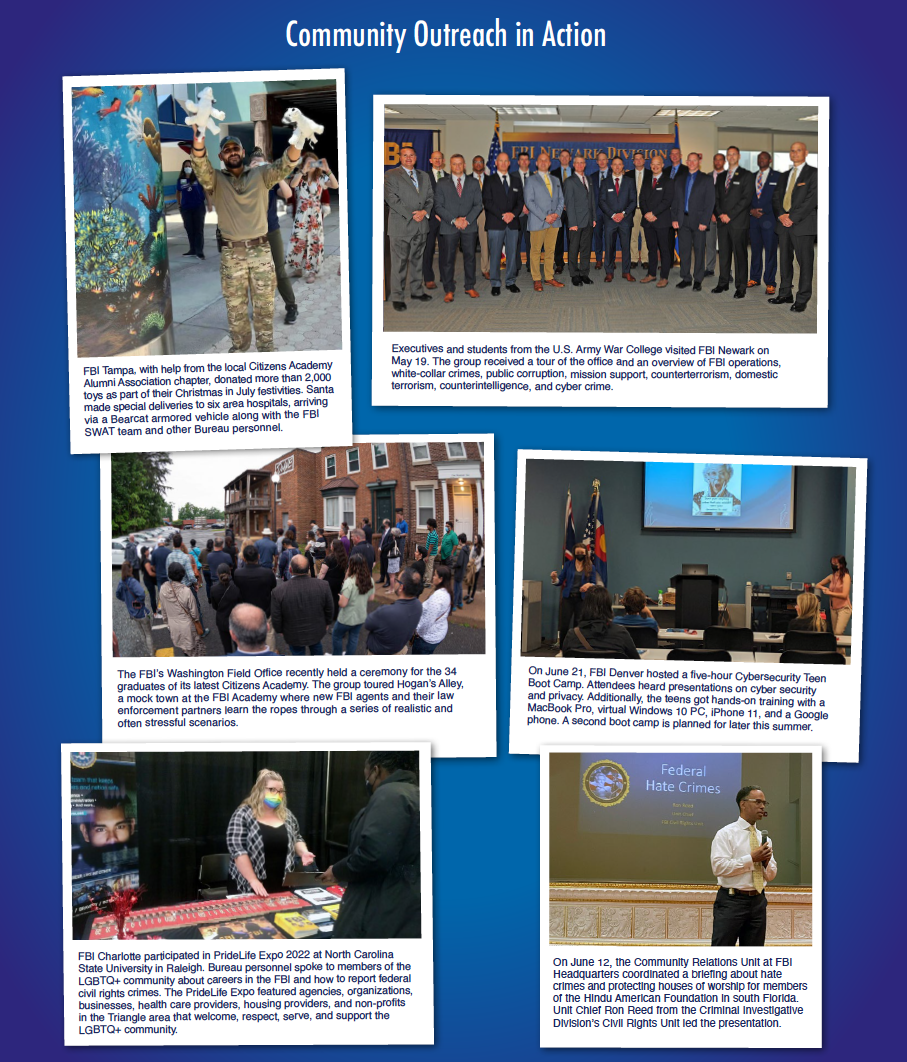 Subscribe to Email Alerts
- Check the Focus on Outreach box under the News category.