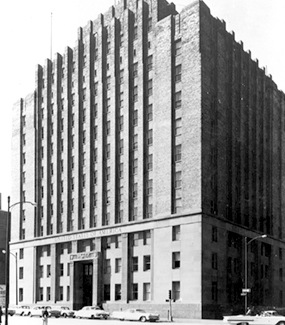 The FBI traces its origins as an organization to 1908, and the Omaha Division began its work in the first decade of the young Bureau’s existence. In those early years, the division dealt with interstate prostitution, draft dodging, land fraud, fugitives, and many other crime matters.

For a brief period between May 1932 and June 1934, the division was closed. When it reopened, Werner J. Hanni was named special agent in charge. The division grew as it tackled new problems, from the violent crime of the 1930s to the national security threats of World War II.

In July 1953, Omaha agents arrested their first Ten Most Wanted fugitive when they tracked down Fleet Robert Current. Current was wanted for unlawful flight to avoid prosecution for robbery. In 1960, the division nabbed its second Top Tenner, locating the wanted murderer Smith G. Hudson, who was hiding out as a farmhand on a property near Cozad, Nebraska.

Over the years, the caseload and complexity of the division’s investigations grew. Airline hijackings became a concern in the 1970s, and the division handled several major cases of this nature. In 1982, FBI Omaha initiated a major undercover investigation called Operation Zookeeper, targeting a key cocaine distribution network in the Omaha metropolitan area. The next year, a federal grand jury indicted 43 individuals, many of them members of the Hells Angels Motorcycle gang. By the end of the year, 15 of the gang members had pled guilty, and many of the rest were later convicted. In 1983, the division also busted a plot by Kansas City’s Civella crime family to extend its illegal gambling operations into Omaha.

In the last two decades, FBI Omaha has investigated everything from fraud and perjury to drug enterprises and violent gangs.

Following the events of 9/11, the division joined the rest of the Bureau in making prevention of terrorist attacks its top priority. In May 2002, FBI Omaha stood up Joint Terrorism Task Forces across its jurisdiction and began to strengthen its intelligence collection, analysis, and dissemination capabilities.

Looking forward, the Omaha Division stands ready to use its growing capabilities to protect the people of Nebraska and Iowa from a host of major national security and criminal threats.