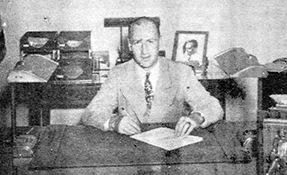 The FBI has operated a field division in Louisville since the second decade of the 20th century. Closed in April 1925, the Louisville Division was reopened in June 1935 under the leadership of Special Agent in Charge O.C. Dewey and has operated continuously ever since.

During World War II, the division saw a sharp increase in responsibilities and resources as it began tackling significant national security cases—including investigating Nazi agents and potential acts of sabotage—while continuing its criminal cases. In the 1950s, the division continued to pursue a range of national security and criminal matters. It went after organized crime groups that violated federal laws, seizing almost a million dollars worth of illegal gambling equipment in 1952. The division also investigated bank robberies and cases of extortion and tracked down fugitives like Joseph Levy, a con artist who Louisville agents nabbed while he was trying to place a bet at the Churchill Downs racetrack. Levy was captured a day before he was to be officially added the FBI’s Ten Most Wanted Fugitives list.

During the next three decades, the division handled not only its traditional challenges, but also new ones that arose when protest groups turned violent and when other emerging crimes occurred. In just one case in 1988, Louisville agents arrested a significant number of Hells Angels motorcycle gang members when they attempted to acquire firearms illegally.

By the early 1990s, the division was strongly focused on political corruption, investigating possible payoffs between lobbyists and state legislators and setting up a toll-free corruption tip-line in March 1992 to solicit additional leads. Multiple indictments and convictions followed. Crimes against children were another key concern, and Louisville agents went after child predators who used the Internet to target their victims. These efforts continued into the next decade, with Louisville agents arresting nine offenders in one 2002 sting.

Following the attacks of 9/11, preventing terrorist attacks became the top priority of the division and the FBI as a whole. In response, FBI Louisville stood up a Joint Terrorism Task Force in 2002 and a Field Intelligence Group in 2003 and made other reforms to strengthen its ability to gather, analyze, and share intelligence. With these changes and a history of strong investigative work, the Louisville Division remains dedicated to protecting and defending its communities and the nation from major national security and criminal threats.