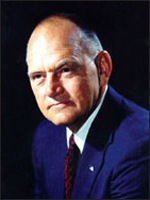 Louis Patrick Gray, III was born in St. Louis, Missouri on July 18, 1916. He attended schools in St. Louis and Houston, Texas. After attending Rice University for a period, Mr. Gray enrolled at the United States Naval Academy and received a Bachelor of Science degree in 1940. The Navy commissioned Mr. Gray as a line officer and he served throughout World War II and the Korean War.

In the late 1960s, Mr. Gray returned to the federal government and worked in the Nixon administration in several different positions. In 1970, President Nixon appointed Mr. Gray as assistant attorney general for the Civil Division in the Department of Justice. In 1972, Mr. Gray was appointed deputy attorney general, but before he could be confirmed by the full Senate, his nomination was withdrawn. Instead, President Nixon designated him as Acting Director of the FBI. Gray served in this position for less than a year.