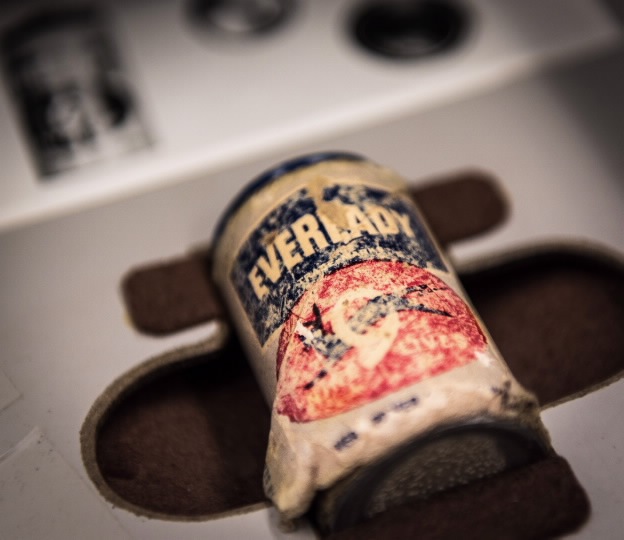 This piece of espionage equipment is a flashlight battery hollowed out to create a container for the concealment of larger objects like a roll of film. (Click image to view high-res.)

James Bond, Jason Bourne, Hollywood. These are what the mind conjures up at the mention of undercover espionage. However, as history tells, spies were and are a very real threat.

In 1948, Soviet Union spy Vilyam Genrikhovich Fisher—under the name Emil R. Goldfus—illegally entered the United States through Canada and would spend the next nine years posing as a photographer and artist in Brooklyn, New York.

He was tasked with finding atomic secrets and gathering top secret intelligence from the United Nations and U.S. military installations. He relayed the information to either Soviet agents or directly to the USSR and, along with another Soviet spy, actively tried to recruit agents in the U.S.

Prior to this agent turning himself in, the FBI had acquired a hollow nickel—discovered by a news boy—that contained an encoded message and had spent years trying to locate its source. Fisher’s partner decoded the message and aided in the capture Fisher.

On June 21, 1957—60 years ago this month—Fisher was arrested by the FBI. He identified himself as Rudolf Ivonovich Abel, his signal to the Soviet Union of his capture, and the name he would be commonly known as. When his apartment in Brooklyn was searched, investigators found shortwave radios, cipher pads, cameras and film for producing microdots, a hollow shaving brush, cuff links, and other espionage equipment.

Fisher appeared before the U.S. Federal Courts in New York in what would become known as the Hollow Nickel Case. He was convicted on three counts of conspiracy and espionage as a Soviet Union spy and sentenced to 45 years of imprisonment and a $3,000 fine. He served four years of this sentence before being traded by the U.S. for Francis Gary Powers, an American U-2 pilot captured by Russia during the Cold War. Fisher returned to the Soviet Union where he would remain as a teacher until his death in 1971.

What had begun as a discovery of an encoded hollow nickel ended with the apprehension of a Soviet Union spy. The story was later dramatized in the well-known 2015 movie "Bridge of Spies."

This is one of the few pieces of espionage equipment found in Abel’s apartment. It is a flashlight battery hollowed out to create a container for the concealment of larger objects such as a roll of film. Encased within the battery, to this day, is a simulated message on a roll of film. It is opened by sliding the outside paper battery cover downward and then unscrewing the top of the battery.