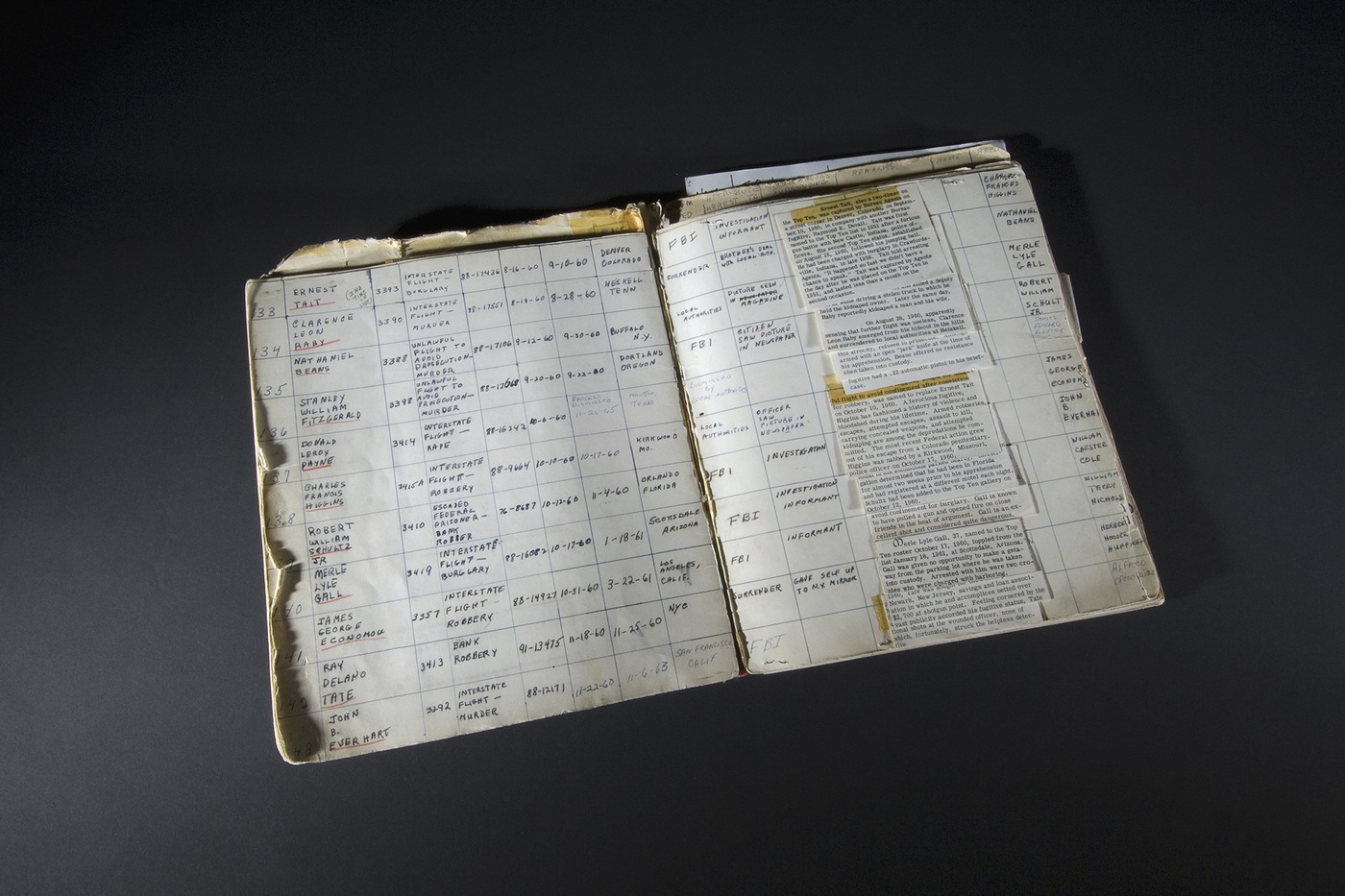 Pictured is one of the original Ten Most Wanted Fugitives ledgers from the early 1960s. (Click image to view high-res.)

﻿The Ten Most Wanted Fugitives list is one of the oldest and most recognizable FBI programs. It came about in March 1950 after a reporter for the International News Service asked the Bureau for the names and descriptions of the “toughest guys” the Bureau would like to capture. The resulting story generated so much publicity and appeal that FBI Director J. Edgar Hoover implemented the Ten Most Wanted Fugitives program.

Since then, 513 fugitives have been on the Top Ten list, and 481 have been apprehended or located. It is designed to publicize particularly dangerous fugitives who might not otherwise merit nationwide attention and relies heavily on the assistance of citizens and the media—in fact, 160 of the Top Ten apprehensions have been the results of tips from citizens.

The list is compiled by the Criminal Investigative Division and the Office of Public Affairs at FBI Headquarters, which calls upon all 56 field offices to submit candidates. The selection of the “proposed” candidate(s) is weighed based on two categories:

At a minimum, a reward of up to $100,000 is offered by the FBI for information that leads directly to the arrest of a Top Ten fugitive. In some instances, the reward amount offered is more than $100,000.

Throughout the history of the Top Ten program, the FBI has utilized a variety of mediums to publicize the fugitives listed. Originally, newspapers and magazines were employed to capture the attention of the domestic reader with profiles and photographs of America’s fugitives. As the program and technology have evolved, the FBI has used television and radio—such as the well-known “America’s Most Wanted” tv show and ABC Radio’s “FBI, This Week”—and social media to attract public attention to the Top Ten list.

The amount of time fugitives have spent on the list has varied significantly. The shortest amount of time spent on the Top Ten list was two hours, by Billy Austin Bryant in 1969. When a fugitive is removed from the list, another is added to take his or her place. A fugitive is removed from the list only when they meet one of the following conditions:

Pictured is one of the original Top Ten ledgers from the early 1960s. It lists fugitives 133-143 on the list by name and includes the charges they were wanted on and the date and city they were arrested in.