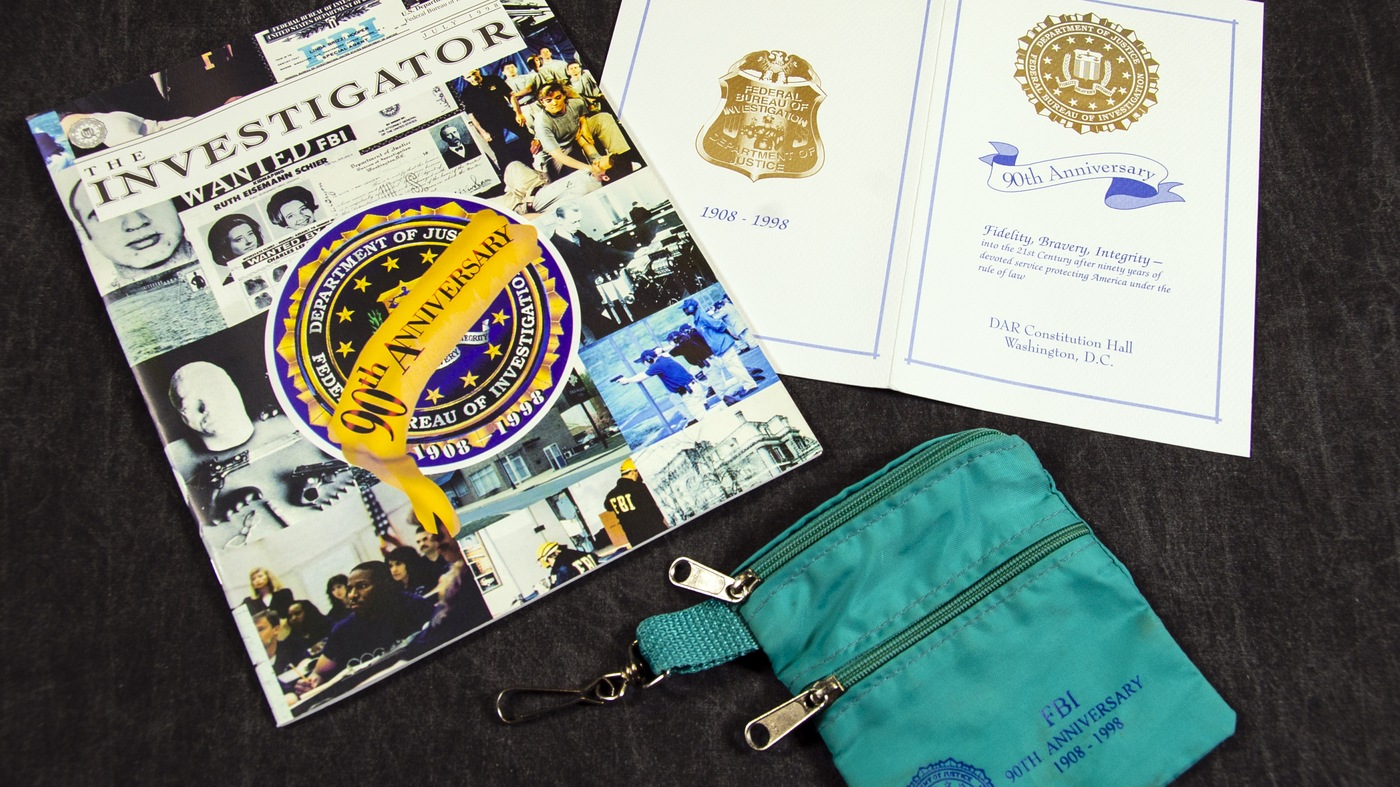 This is a collection of some of the memorabilia marking the Bureau’s 90th anniversary in 1998. (Click image to view high-res.)

From the early days of combating mobsters, corporate monopolies, anarchists, gangsters, and World War II and Cold War spies to today’s white-collar criminals, terrorists, international crime organizations, and cyber criminals, the FBI has served for more than a century as the nation’s top crime-stopping force, and this month we’re celebrating it by recalling one of the Bureau’s most historical moments.

This is a collection of some of the memorabilia marking the Bureau’s 90th anniversary in 1998.

There, the new agent class of 1998 took the oath of office, and the Bureau also unveiled the then new Strategic Information and Operations Center (SIOC) in the J. Edgar Hoover Building.

On November 20, former FBI Director Louis Freeh, former Attorney General Janet Reno, and several other prominent figures gathered together in the Daughters of the American Revolution Constitution Hall to celebrate the Bureau’s 90th birthday. There, the new agent class of 1998 took the oath of office, and the Bureau also unveiled the then new Strategic Information and Operations Center (SIOC) in the J. Edgar Hoover Building.

The 90th anniversary collection features a brochure from the event, along with the special anniversary edition of “The Investigator” (a monthly published magazine for personnel of the FBI) and a supply pouch.

The 1990s saw an increase in the threat of terrorism impacting the U.S., with the World Trade Center bombing in 1993 and the Oklahoma City bombing in 1995. The Bureau adapted to the growing threats by establishing new programs, like the Computer Analysis and Response Team (CART) in 1991, which aims at retrieving computer evidence, and the launching of the National Instant Criminal Background Check System (NICS) in 1998. The 1990s was also a big decade for the FBI in Hollywood, with the release of the five-time Academy Award winning film Silence of the Lambs in 1991, telling the story of a special agent who uses her skills in forensic science to rescue a kidnapped woman and apprehend her captor.

The Bureau’s origins date far before Hollywood blockbusters. After President McKinley’s assassination in 1901, his vice president, Theodore Roosevelt, took the oath of office and devoted his presidency to fighting the growing wave of federal criminal matters plaguing the nation. On July 26, 1908, a lack of federal investigators available to apprehend criminals prompted Charles Bonaparte, Roosevelt’s Attorney General, to establish his own force of investigators known now as the Federal Bureau of Investigation. That was 110 years ago this month.

Once an unnamed fledgling organization composed of just 34 agents, today the FBI is a world-renowned law enforcement and intelligence agency of over 37,000 special agents, analysts, and professionals. From John Dillinger’s gang in the depression-era to today’s international terrorist threats like ISIS, the FBI has evolved to match the ever-changing criminal landscape, and the FBI will continue to adapt to criminal nuances and innovations to ensure the security and safety of the United States.