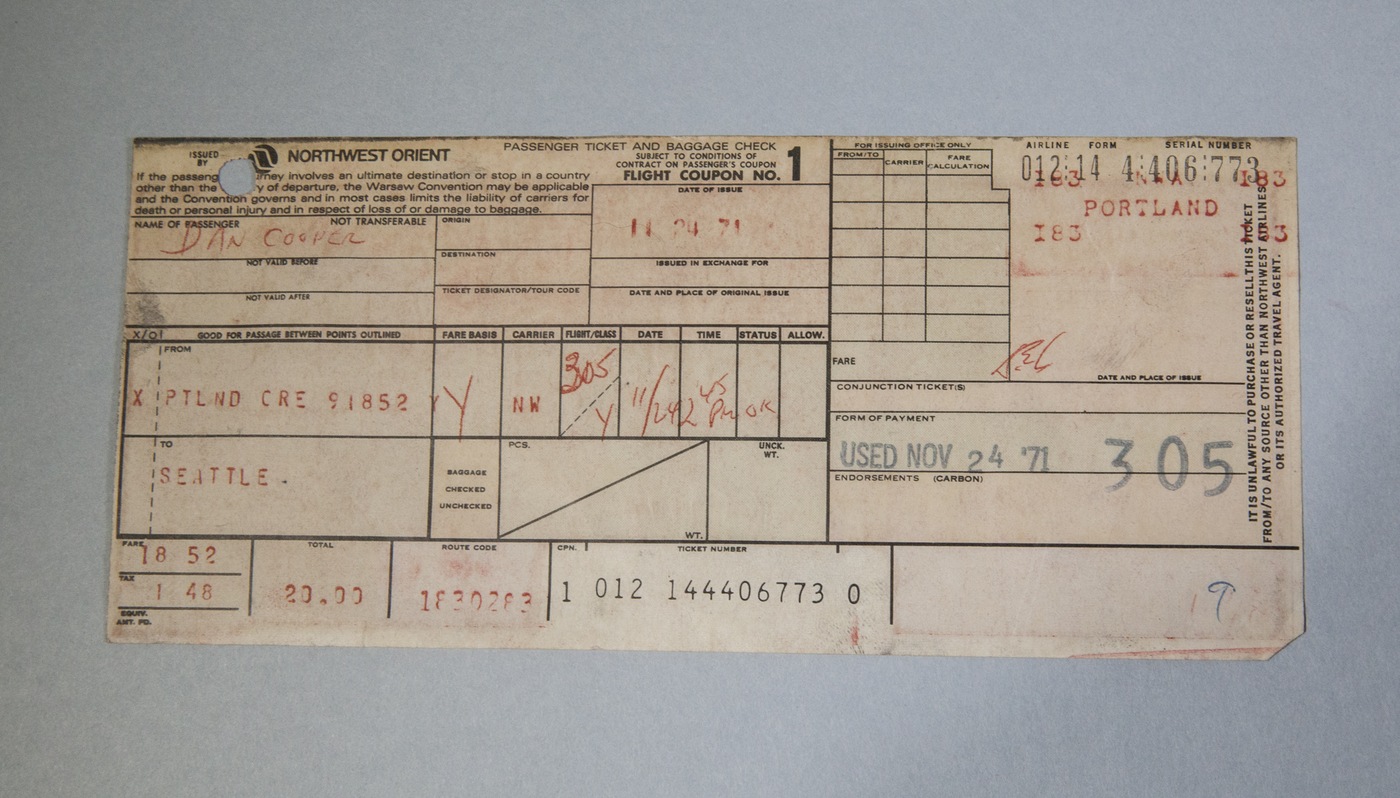 This is the plane ticket hijacker D.B. Cooper bought under the name Dan Cooper for the flight to Seattle. (Click image to view high-res.)

On November 24, 1971, a man calling himself Dan Cooper approached the counter of Northwest Orient Airlines in Portland, Oregon and used cash to buy a one-way ticket on a flight to Seattle, Washington.

During the flight, Cooper handed the flight attendant a note indicating he had a bomb in his briefcase and wanted her to sit with him. The flight attendant stat down, and Cooper showed her a mass of wires and red-colored sticks. Cooper told her to take his demands to the pilot—he wanted four parachutes and $200,000 in 20-dollar bills.

Upon landing in Seattle, Cooper released the passengers in exchange for the money and parachutes but made several crew members remain, including the pilot. The plane took off again, and Cooper demanded a course be set for Mexico City.

However, somewhere between Seattle and Reno, Nevada, a little after 8 p.m., Cooper jumped out the back of the plane with the parachute and ransom money, disappearing forever.

The FBI became involved during the flight and opened what has now become one of the FBI’s longest cold cases in FBI history—NORJAK, for Northwest hijacking—a case that led us to interview hundreds of people, track leads across the country, and scour the plane for forensic evidence. Pictured is the plane ticket Cooper bought under the name Dan Cooper for the flight to Seattle.

Many theories abound, and perhaps we will never know what actually happened to D.B. Cooper after he jumped. The Seattle Field Office has redirected resources allocated to the D.B. Cooper case in order to focus on other investigative priorities. However, the case remains an intriguing mystery for law enforcement and amateur sleuths, and though we will no longer actively investigate the case, should specific physical evidence emerge, individuals with those materials are asked to contact their local FBI field office.