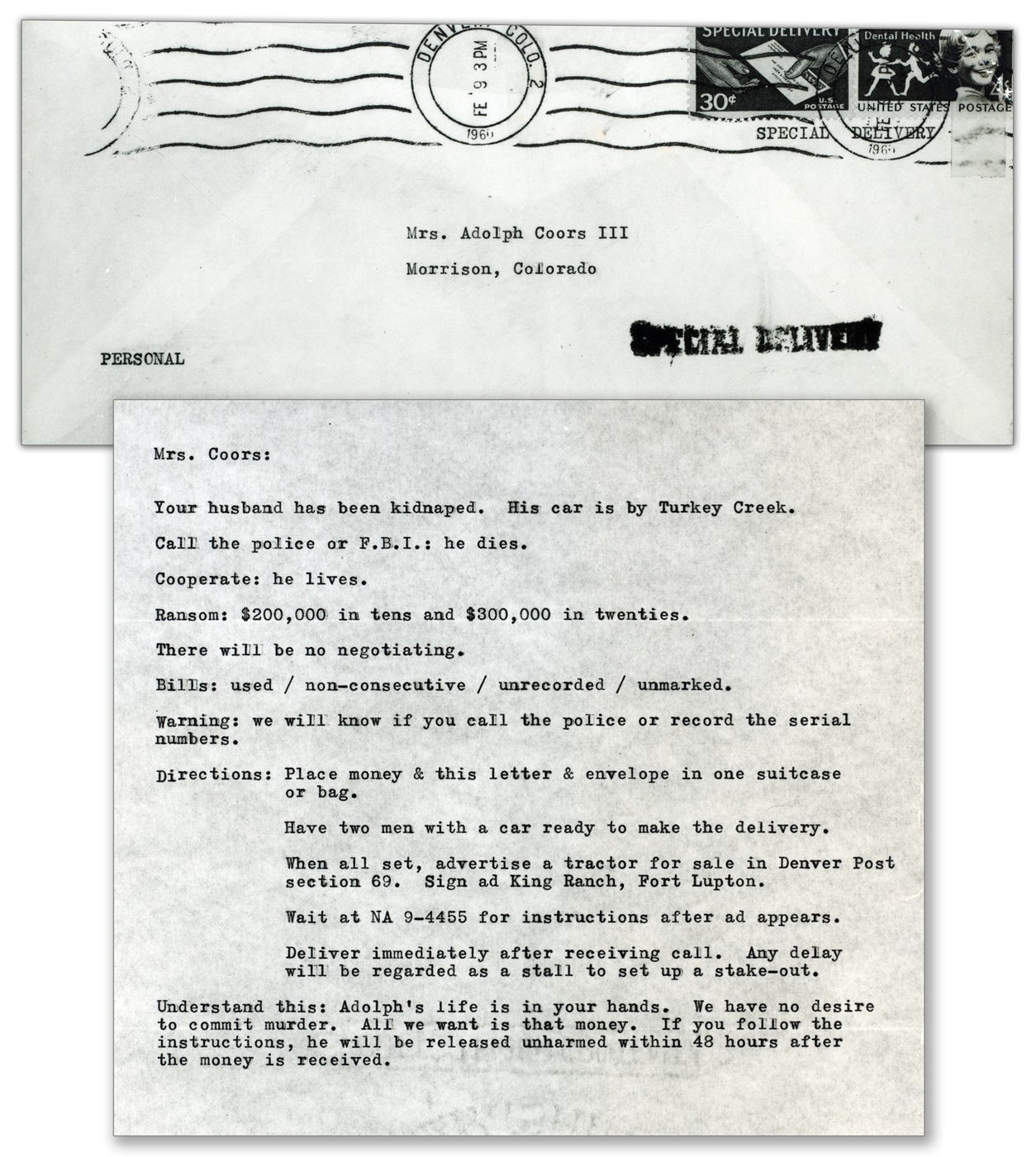 The Coors kidnapping ransom note was analyzed by the FBI Lab and is believed to have been typed on Corbett Jr.’s typewriter. (Click image to view high-res.)

In 1961, Joseph Corbett Jr. was convicted and sentenced for the murder of Adolph Coors III, heir to the Coors Brewing Company fortune.

On February 9, 1960, a milkman discovered an abandoned station wagon blocking the middle of the bridge over Turkey Creek near Morrison, Colorado. The milkman reported it to the local police, who determined the car belonged to Adolph Coors III, who now appeared to be missing.

The next day, the FBI’s Denver Division, as a result of the federal kidnapping statue, joined the case to provide assistance to the state and local investigators. Coors’ wife Mary received a typewritten ransom note and contacted the kidnapper, but she never heard back.

The FBI Laboratory took a look at the evidence, including the note, while state and local law enforcement began pursuing a lead—a canary-yellow Mercury that had been seen in the area. The driver, Walter Osborne, had disappeared, but not before obtaining a gun, handcuffs, a typewriter, and an insurance policy—whose beneficiary was Joseph Corbett.

As it turns out, Corbett’s son had previously been convicted of murder but had escaped from prison in California. The FBI obtained a fugitive warrant for Corbett Jr. and placed him on the Ten Most Wanted Fugitives list.

In September 1960, some hikers came across pants bearing Coors’ initials, which led investigators to Coors’ remains.

The case remained of significant interest to the public and the media, and ultimately, magazine readers in Canada broke the case wide open when they reported a man who resembled Corbett Jr. to the Royal Canadian Mounted Police and the FBI. The next day, the manager of a rooming house in Winnipeg reported a man who looked like Corbett Jr. had stayed at her losing and was driving a fire-engine red Pontiac.

This new information led a Vancouver Police officer to report a similar vehicle to the authorities, and with the assistance of the FBI Toronto Legal Attaché office, law enforcement approached the hotel room where Corbett Jr. was staying, and he surrendered. Corbett Jr. was tried in Colorado on the murder charge and was convicted and sentenced to life in prison.