The FBI’s Washington Field Office is pleased to announce the All Dulles Area Muslim Society (ADAMS) Center as a recipient of the 2015 Director’s Community Leadership Award (DCLA). The ADAMS Center was selected for their leadership role in building partnerships between law enforcement and the Muslim community to enhance mutual cooperation and public safety.

The Director’s Community Leadership Award was created in 1990 as a way to honor individuals and organizations for their efforts in combating crime, terrorism, drugs and violence in America. Recipients of this award are nominated by each of the FBI’s 56 field offices and are recognized for their service above and beyond the call of duty to help keep America and its residents safe. 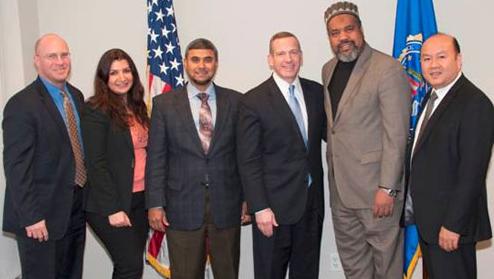 “We are very fortunate to have such strong community partners in the ADAMS Center and its leadership team. For years, the ADAMS Center has worked tirelessly to share the perspectives and concerns of the local community with the FBI Washington Field Office and our law enforcement partners, so that we can be most responsive to the communities we serve and best prepared in keeping our citizens safe,” said Assistant Director in Charge Paul Abbate. “Our goal is to form trusting relationships with the communities and people we serve. Together, we will continue our work in educating the public about law enforcement, and preventing acts of violence, terrorism, and hate crimes, while building a safe environment for our families and communities.” 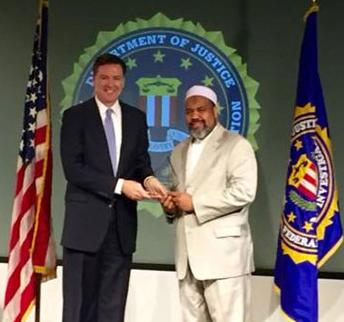 On April 15, 2016, the ADAMS Center’s Imam Mohamed Magid attended a ceremony at FBI Headquarters where he, along with recipients from across the country, was presented with the award by FBI Director James B. Comey.