The FBI and the Cape Girardeau Police Department are investigating an alleged adult abduction and are seeking information from the public.

The new photos below were taken in Anna, Illinois. There appears to be a large dent on the rear quarter panel behind rear tire on the passenger side. The truck may have traveled south on I-55 from Cape Girardeau to near Matthews, Missouri, and then back to Cape Girardeau before crossing into Illinois. 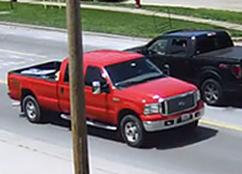 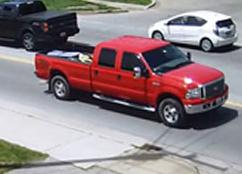 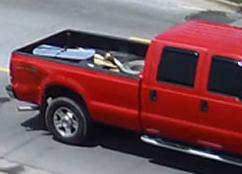 On May 12, 2015, an adult female told authorities she was abducted for hours before escaping her captor. The female says she was sitting in her vehicle in South County Park in Cape Girardeau when she was physically forced into a red extended cab pick-up truck. It happened sometime between 11 a.m. and noon on May 12, 2015. The female says she was then driven to various locations and assaulted before she managed to escape in Effingham, Illinois around 6:00 p.m.. The vehicle may have traveled south on I-55 from Cape Girardeau and then back to Cape Girardeau before crossing into Illinois.

The female describes her alleged abductor as a white male in his mid to late 30s with a salt-and-pepper goatee. He is approximately 5’10” and heavy set, wearing a ball cap, long-sleeve top that was dirty, and light blue jeans. The suspect is possibly hard of hearing and a heavy smoker.

If you have information about this case, please call the FBI at 1-800-CALL-FBI.