Returned to the United States to Face Charges in Pierce County

A fugitive was returned to the United States on August 9, 2018 after more than 10 years on the run. Agents from the FBI’s Seattle Field Office escorted Jesus Richard Mederos, 32, formerly of Tacoma, Washington, back from Mexico. Mederos will face state charges of Murder in the Second Degree and Unlawful Possession of a Firearm in the First Degree filed by the Pierce County Prosecutor’s Office (PCPAO). The Superior Court of Washington for Pierce County issued a warrant for Mederos’s arrest after the October 20, 2006, murder of an 18-year-old man in Tacoma, Washington. On December 23, 2016, a federal arrest warrant was issued for Mederos in the United States District Court, Western District of Washington, Tacoma, Washington, after he was charged with Unlawful Flight to Avoid Prosecution.

Mederos was taken into custody without incident in May 2017, in Cuernavaca, Morelos, Mexico, by the Policía Federal Ministerial, in close coordination with the FBI Legal Attaché office at the U.S. Embassy in Mexico City. Mexican authorities transferred Mederos to FBI custody on Thursday morning. FBI agents then transported Mederos to Washington State, where he was booked into the Pierce County jail yesterday evening, August 9, 2018.

Tacoma Police Department (TPD) conducted the murder investigation. In the course of pursuing a parallel FBI investigation, the FBI’s Tacoma Resident Agency—a part of the Seattle Field Office—developed information on Mederos’ location. The FBI, TPD, and the PCPAO routinely collaborate on cases like this one, through the South Sound Cold Case Working Group.

“The FBI is committed to working alongside our local partners in Pierce County and Tacoma to ensure violent individuals answer for their crimes,” said Special Agent in Charge Jay S. Tabb Jr., of the FBI’s Seattle Field Office. Neither time nor distance will deter us in the pursuit of Justice.”

Investigators extend particular appreciation to authorities in Mexico for their partnership. Their role was critical in ensuring Mederos will face justice for his alleged actions.

“It doesn’t matter how long or how far they run, we will find them,” said Prosecutor Mark Lindquist. “Working with our law enforcement partners here in Washington and around the world, we will hold them accountable, provide justice for victims’ families, and keep our community safe.” 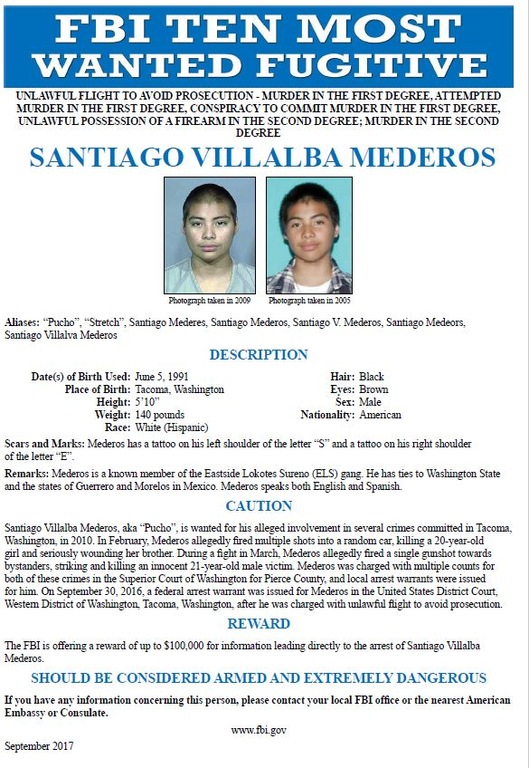