SAN JUAN, PR—The Special Agent in Charge of the FBI San Juan Field Office Joseph González, announced today the celebration of a women’s forum. The topic of the forum was “Inspiring Women”, and the purpose was to honor extraordinary women in public service in observance of Women’s History Month.

Special guest speakers were Congresswoman Jennifer González Colón, who spoke about her journey from her very beginnings in politics to becoming the first female Resident Commissioner for Puerto Rico. “I know the feeling of having to fight double or even three times harder than the men around me to achieve my goals and aspirations. I want to change that so that women have a seat at the table and are included in the decision-making process. As Speaker of the Puerto Rico House of Representatives, I created a Women’s Caucus, and I have continued that work in the U.S. House of Representatives as Co-chair of the Congressional Caucus for Women’s Issues where I work to achieve policies such as the reauthorization of VAWA, encourage discussion on women issues like media representation, and stop sexual harassment at workplace.”, said González Colón as she addressed a room packed full of FBI agents and personnel.

“Like in the FBI, Congress, and politics in general, is a male-dominated sector. In Puerto Rico, only 34 (21.5%) of the 158 main electives positions are held by women. One of the things I find most inspiring is women openly supporting and lifting each other up so I invite all the women to look out for each other, together we are a powerful force and voice,” the Congresswoman added in her closing remarks.

The Resident Commissioner for Puerto Rico then took the opportunity to recognize two of her fellow panelists, Supervisory Special Agent Stacie Lane, in charge of the Cyber Squad, and Strategic Operations Specialist, Adaliz Pagán, who is also a helicopter pilot for the Puerto Rico Army National Guard (PRANG). SSA Lane and SOS Pagán received recognition from Congresswoman González for their career achievements and for being strong female role models in the field of National Security.

During her remarks, SSA Lane shared her experience overcoming the trauma of losing her mom to domestic violence at the hands of her father. “He was a federal fugitive...” – said Lane – “I thought the FBI would never want me. I thought I was tainted… but my time in the military taught me that sometimes you just have to push through the fear, and I decided to try.” Of course, the FBI looked beyond the circumstances Lane grew up in and saw her potential and who she truly was. “To this day, I have never experienced greater joy than what I experience leading this amazing group of Agents every day,” she said. Lane then, when asked for advice to young women, added “Believe in yourself.”

SOS Pagán talked about her experience becoming the first female helicopter pilot in her military unit and about juggling two careers (military and FBI), as well as her family life. “The biggest sacrifice I’ve had to make, is time away from family,” stated Pagán, who explained that though there were times she wanted to give up, it was her husband and their young son, who provided the greatest motivation for her to continue. “I knew I had to keep going and graduate, and receive my wings, and pin them on my uniform because they [my family] had already sacrificed so much of me not being in the home,” she said firmly.

The forum was also graced with a message from Karla Mercado Rivera, Administrator for the Puerto Rico GSA, who was honored for being the youngest female ever to become the head of a government agency in Puerto Rico. “Part of leading and effecting change is facing the social standards, of what to be and how to be, head-on. Youth, ideology, and what defines us as human beings, even gender, no longer serves to identify us when we chose to serve. I don’t walk into a meeting thinking about my age or the fact that I am a woman. I execute my functions focused on my objectives and on achieving the necessary results for sound public administration. At the end of the day, as women, we are all fighting for the same thing: that our performance be the thing that defines us.”, said Mercado in a written statement since she was unable to attend the event in person.

“This effort and this forum today are the reflections of what successful women look like from different sectors, political, administrative, and oversight. We are united here in one voice to let it be known that it is our work which defines us. I deeply regret not being with you all in person today, but I share in the honor of being inspired by amazing women, and thank you for allowing me to share some of my thoughts on this topic with you all.” – she closed.

“As the father of two young girls and the husband to an outstanding woman, it is important for me to create an environment where women can be empowered and inspired to be the very best version of themselves that they can possibly be, without being limited by unnecessary obstacles,” said Special Agent in Charge of the FBI San Juan Field Office. “I am honored to host these amazing women here and I hope you all leave here as inspired as I am by their stories.” 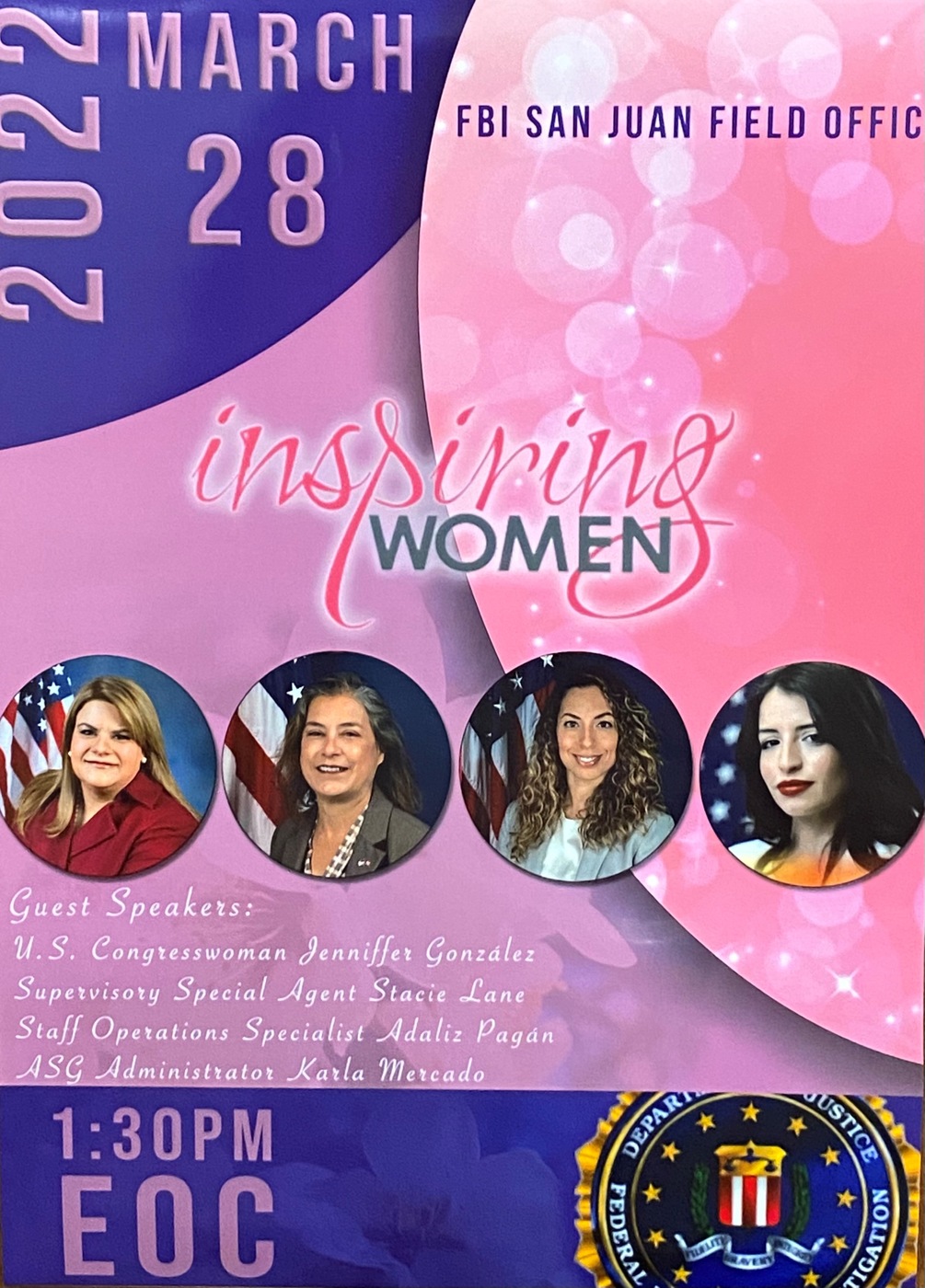