The DCLA was established in 1990 as a way to honor individuals and organizations for their efforts to prevent crime, terrorism, drugs, and violence as well as to further law enforcement efforts in their communities. Each year, the special agent in charge of each of the FBI’s 56 field offices selects an honoree that has made a significant difference in their community. MANA de San Diego was selected by SAC Birnbaum for the incredible work they have done for the San Diego community this past year. Significant contributions included the prevention of youth involvement in crime, drugs, gangs, and violence through their efforts in education, community awareness, investment in people, and its youth program.

The mission of the San Diego Chapter of MANA is to empower Latinas through education, leadership development, advocacy, and community service. MANA National came into existence in 1974 and currently has 17 chapters in the United States, including MANA de San Diego, which was established over 21 years ago. MANA de San Diego achieves their mission by hosting educational seminars, leadership conferences, networking meetings, and much more. One of MANA’s most impacting programs is the Hermanitas Youth Leadership Mentor Program.

Created in 1987, the nationally recognized “Hermanitas Youth Leadership Mentor Program” has served over 800 local Latinas, ages 12 to 18. The program’s goal is to elevate the potential of Latinas in the community and create a generation of strong, capable young women. The program features a curriculum of monthly educational seminars, community service, and writing and reading assignments. Young, at-risk Latinas are provided with educational and skill-building opportunities, leadership development, mentoring, and peer support. The teens’ families are also engaged in the program and offered educational opportunities and seminars. The program tracks “at risk of dropping out” factors including attendance, grades, and behavioral issues. Additional elements of the program include support in applying to college, financial aid, and scholarships. The MANA de San Diego scholarship program has helped almost 450 young Latinas with financial assistance to make their dream of attending college a reality.

An independently-evaluated, national, three-year MANA study published in the Harvard Journal of Hispanic Policy (Volume 19, 2006-2007) assessed the impact of the national Hermanitas Program and found that “Hermanitas” who participated in the program achieved the following outcomes: maintained consistent levels of self-esteem, displayed lower rates of depression than national averages, displayed an increasingly negative view of drugs and alcohol, and displayed a growing positive attitude toward school and higher education. Through reaching at-risk youth, MANA is significantly impacting youth involvement in crime, drugs, gangs, and violence.

MANA has furthered its engagement with the FBI this past year by inviting the San Diego Division to participate in its programs and hosting an FBI Community Relations Executive Seminar Training (CREST), which covered gangs, an overview of the FBI, the Evidence Response Team (ERT), and FBI careers. MANA also co-hosted a 'Platica' (seminar) to raise awareness about human trafficking in the Latino community and are exploring more ways to partner with the FBI on topics that affect the community. In doing so, this group continues working to reduce crime in the San Diego community through educating, engaging, partnering with the Latino community.

As evidenced by these examples, MANA is an organization of prevention and empowerment in the community. This commitment to leadership and action prove MANA de San Diego as a deserving recipient of the 2017 FBI Directors Community Leadership Award.

Ms. Molina and Ms. Salgado will join DCLA recipients selected by other FBI field offices across the nation at an awards ceremony to be held in Washington, D.C., on April 20, 2018, where they will be personally recognized and be honored by FBI Director Christopher Wray. 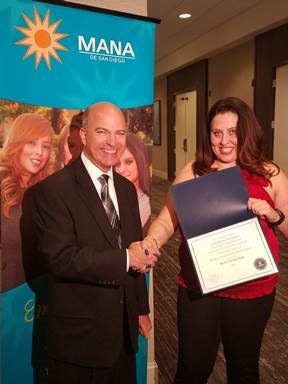