According to the LEOKA report, these officers were among the 76 men and women killed in the line of duty during 2013—27 died as a result of felonious acts, and 49 died in accidents. Another 49,851 law enforcement officers were victims of line-of-duty assaults.

According to statistics collected by the FBI, 76 law enforcement officers were killed in line-of-duty incidents in 2013. Of these, 27 law enforcement officers died as a result of felonious acts, and 49 officers died in accidents. In addition, 49,851 officers were victims of line-of-duty assaults. Comprehensive data tables about these incidents and brief narratives describing the fatal attacks and selected assaults resulting in injury are included in the 2013 edition of Law Enforcement Officers Killed and Assaulted.

Of the 49 officers accidentally killed, 23 died as a result of automobile accidents.

Of the nearly 49,851 officers assaulted during 2013, the largest percentage of victim officers (31.2 percent) were responding to disturbance calls (family quarrels, bar fights, etc.) when the incidents occurred.

Of the officers who were accidentally killed in the line of duty in 2013:

Of the 9 officers struck by vehicles:

Months, days, and times of incidents:

Circumstances: Of the 27 officers feloniously killed, six were killed in arrest situations, five were investigating suspicious persons or circumstances, five were ambushed, four were involved in tactical situations, four were answering disturbance calls, and two were conducting traffic pursuits/stops. One was conducting an investigative activity, such as surveillance, a search, or an interview.

Weapons: Offenders used firearms to kill 26 of the 27 victim officers. Of these 26 officers, 18 were slain with handguns, five with rifles, and three with shotguns. One officer was killed with a vehicle used as a weapon.

Regions: Fifteen of the felonious deaths occurred in the South, six in the West, four in the Midwest, and two in the Northeast.

Suspects: Law enforcement agencies identified 28 alleged assailants in connection with the felonious line-of-duty deaths. Twenty of the assailants had prior criminal arrests, and six of the offenders were under judicial supervision at the time of the felonious incidents.

Forty-nine law enforcement officers were killed accidentally while performing their duties in 2013. The majority (23 officers) were killed in automobile accidents. The number of accidental line-of-duty deaths increased by one from the 2012 total (48 officers).

Regions: Thirty-one of the accidental deaths occurred in the South, nine in the West, five in the Northeast, and 4 in the Midwest.

In 2013, of the 49,851 officers assaulted while performing their duties, 29.2 percent were injured. The largest percentage of victim officers (31.2 percent) were assaulted while responding to disturbance calls. Assailants used personal weapons (hands, fists, feet, etc.) in 79.8 percent of the incidents, firearms in 4.5 percent of incidents, and knives or other cutting instruments in 1.8 percent of the incidents. Other types of dangerous weapons were used in 13.9 percent of assaults. Expanded assault details have been included in the 2013 publication. Data for assaults during which officers were injured with firearms or knives/other cutting instruments are located in new tables, figures, and selected narratives. 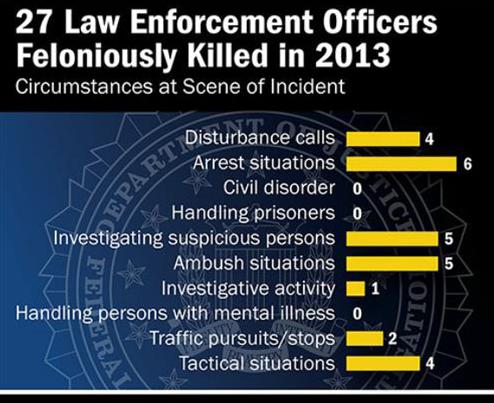 The information in the report comes from various sources—the law enforcement agencies participating in the UCR Program, FBI field offices, and several non-profit organizations, such as the Concerns of Police Survivors and the National Law Enforcement Officers Memorial Fund.

The goal of the FBI’s LEOKA program is to provide data and training that help keep law enforcement officers safe as they serve and protect our nation’s communities. To view the entire report please visit www.fbi.gov.