A man believed responsible for robbing two U.S. Bank branches both located inside Vons grocery stores within the last couple of days is being sought by the San Diego Police Department and the FBI.

On Thursday, August 14, 2014, at approximately 10:49 a.m., the U.S. Bank branch located inside the Vons grocery store at 620 Dennery Road in San Diego, California, was robbed by an unknown male who made expletive-laden demands for money and threatened to be armed with a gun. At the time of the robbery, the robber entered the grocery store and walked over towards the bank. The robber waited in line until he was called to the victim teller’s counter. Once at the teller counter the robber stated, “This is a robbery.” The robber also made additional expletive-laden demands for money. The robber threatened the teller and stated he was armed with a gun. After receiving a sum of money, the robber exited the grocery store.

This same man is believed to be responsible for robbing another U.S. Bank, located inside of another Vons grocery, earlier this week.

On Tuesday, August 12, 2014, at approximately 10:08 a.m., an unknown male with a scruffy beard and wearing a bright teal blue T-shirt robbed the U.S. Bank, located inside of the Vons grocery store at 665 Saturn Boulevard, San Diego, California. The robber entered the grocery store, walked over to the bank teller’s counter, leaned over, and said, “This is a robbery.” The robber repeated his demand using expletives. After receiving a sum of money, the robber walked away towards the grocery store exit doors. A weapon was not observed and no injuries reported.

Bank surveillance photographs from the US Bank, located inside of the Vons grocery store 620 Dennery Road, San Diego, California, on Thursday August, 14, 2014: 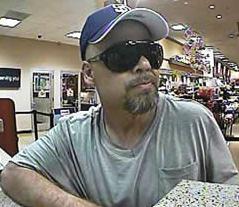 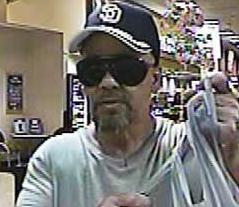 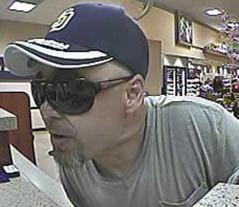 Bank surveillance photograph from the US Bank, located inside of the Vons grocery store 620 Dennery Road, San Diego, California, on Tuesday, August, 12, 2014: 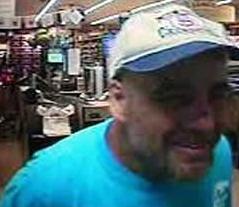