A 7 month-old baby who went missing with her mother nearly three weeks ago has been found in Mexico.

The child was located by Mexican authorities on July 17, 2017. FBI officials, working with the United States Consulate General’s office in Nuevo Laredo, were able to safely return the child to the United States this morning. The investigation into the disappearance of the child’s 21-year-old mother, Eunice Noemi Garza, continues.

The FBI, along with Homeland Security Investigations, Nuevo Laredo, and the Webb County Sheriff’s Office, is conducting the investigation. Anyone with information about Garza’s disappearance is encouraged to contact San Antonio FBI at 210-225-6741. Information can also be submitted online at tips.fbi.gov. Individuals providing information may remain anonymous. 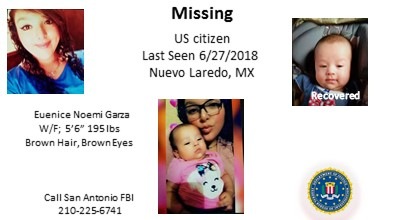