May 12-18, 2019 marks National Police Week 2019, during which the FBI will pay tribute to fallen law enforcement officers and agents who were killed or injured in the line of duty. This year, the FBI launched a nationwide media campaign that reinforces its determination to find those who committed violent acts targeting law enforcement officers. Through various media avenues and publicity tools, the Violence Against Law Enforcement Officers media campaign will bring increased attention to identified fugitives and unknown assailants in an attempt to locate, arrest and bring justice to the families and agencies of the fallen victims.

Beginning May 13, field offices across the country will highlight investigations where increased publicity is appropriate and potentially beneficial. In addition to this release being updated throughout the week with new cases, social media and digital billboards will be utilized to bring awareness to this campaign. 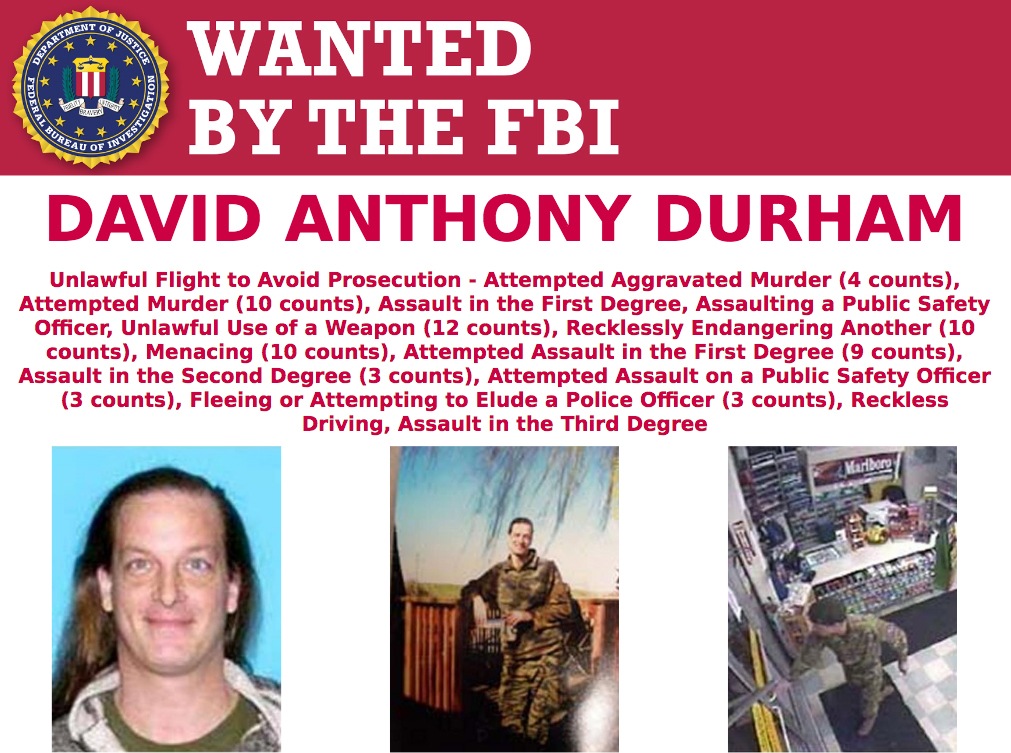 David Anthony Durham is wanted for his alleged involvement in the shooting of a police officer in Lincoln City, Oregon. At approximately 11:00 p.m. on January 23, 2011, the police officer pulled over an SUV for a traffic violation. During the traffic stop, the driver of the vehicle, later identified as Durham, shot the officer multiple times and critically wounded him. Durham then fled the area in the vehicle. A police chase ensued and Durham exchanged gunfire with officers before abandoning his vehicle in Waldport, Oregon. 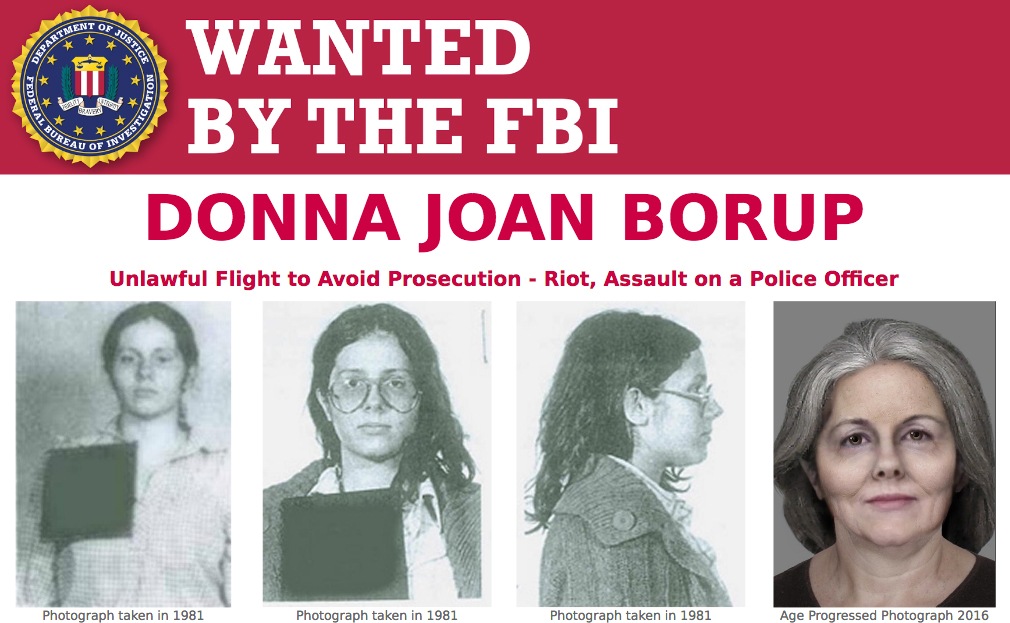 Donna Joan Borup is wanted for her alleged participation in a violent anti-apartheid demonstration at JFK International Airport in Queens, New York, on September 26, 1981. During the riot, Borup allegedly tossed a caustic substance into the eyes of a Port Authority Police Officer, leaving him partially blind. At the time, Borup was a member of the May 19th Communist Organization, a Marxist-Leninist organization that advocated the armed revolution and violent overthrow of the United States government.

Most Wanted Terrorist: Joanne Deborah Chesimard
Reward of up to $1,000,000 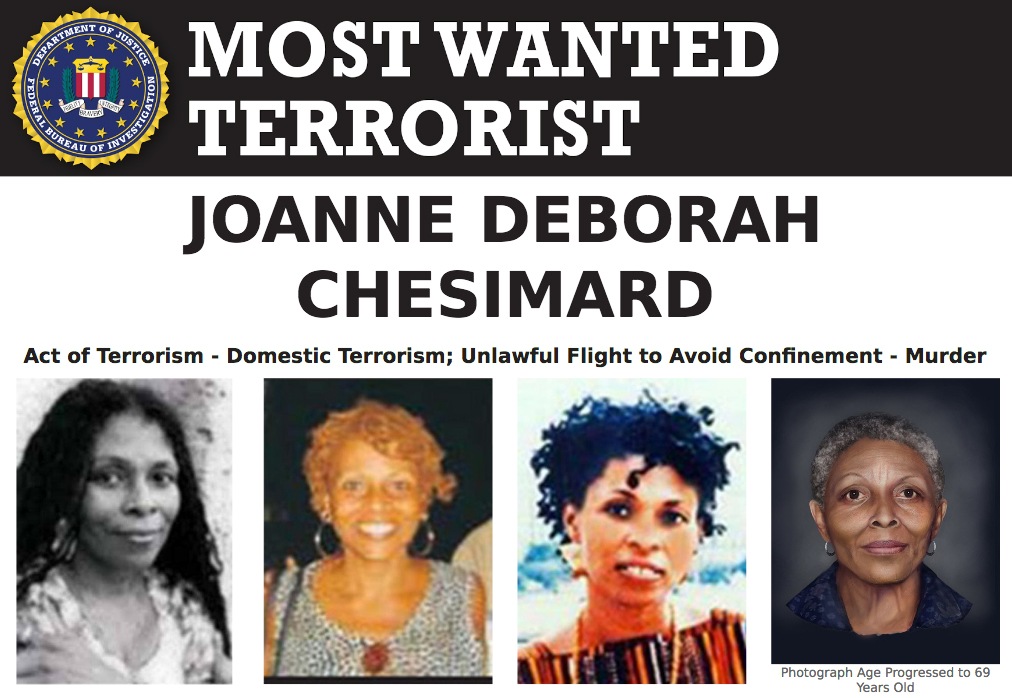 Joanne Chesimard is wanted for escaping from prison in Clinton, New Jersey, while serving a life sentence for murder. On May 2, 1973, Chesimard, who was part of a revolutionary extremist organization known as the Black Liberation Army, and two accomplices were stopped for a motor vehicle violation on the New Jersey Turnpike by two troopers with the New Jersey State Police. At the time, Chesimard was wanted for her involvement in several felonies, including bank robbery. Chesimard and her accomplices opened fire on the troopers. One trooper was wounded and the other was shot and killed execution-style at point-blank range. 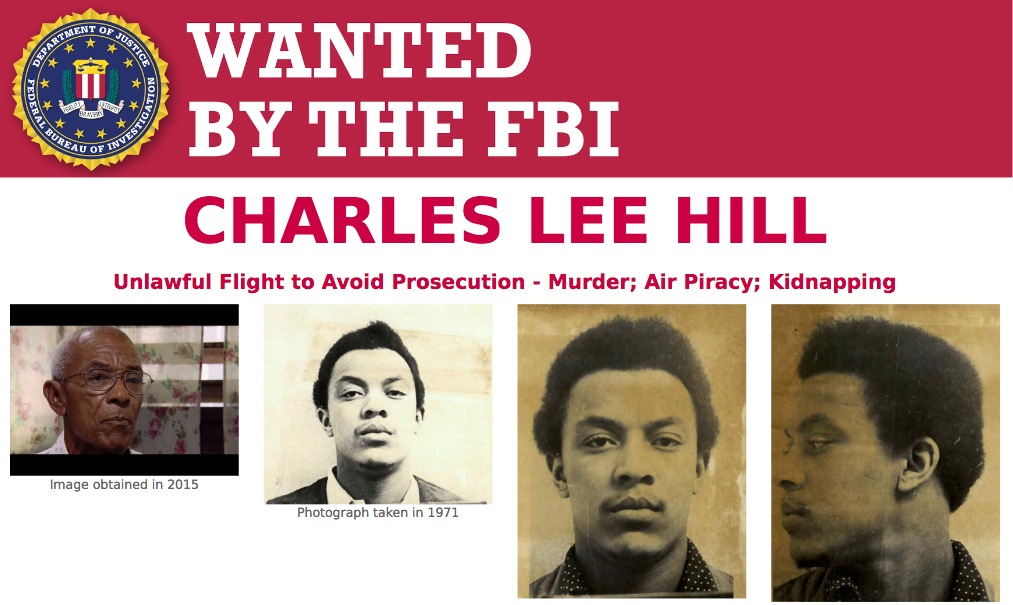 Charles Lee Hill is wanted for his alleged involvement in a series of violent crimes that occurred in November of 1971. On November 8, 1971, Hill was allegedly involved in the shooting death of a New Mexico State Police officer during a traffic stop approximately 15 miles west of Albuquerque, New Mexico. On November 27, 1971, Hill and two accomplices (believed to be deceased), allegedly also kidnapped a tow truck driver at gunpoint and forced him to drive the trio to the Albuquerque International Airport. The three men are alleged to have then hijacked a Trans World Airlines (TWA) fight, re-routing the plane to Tampa, Florida. After exchanging the hostages for fuel, Hill and his accomplices flew to Havana, Cuba. 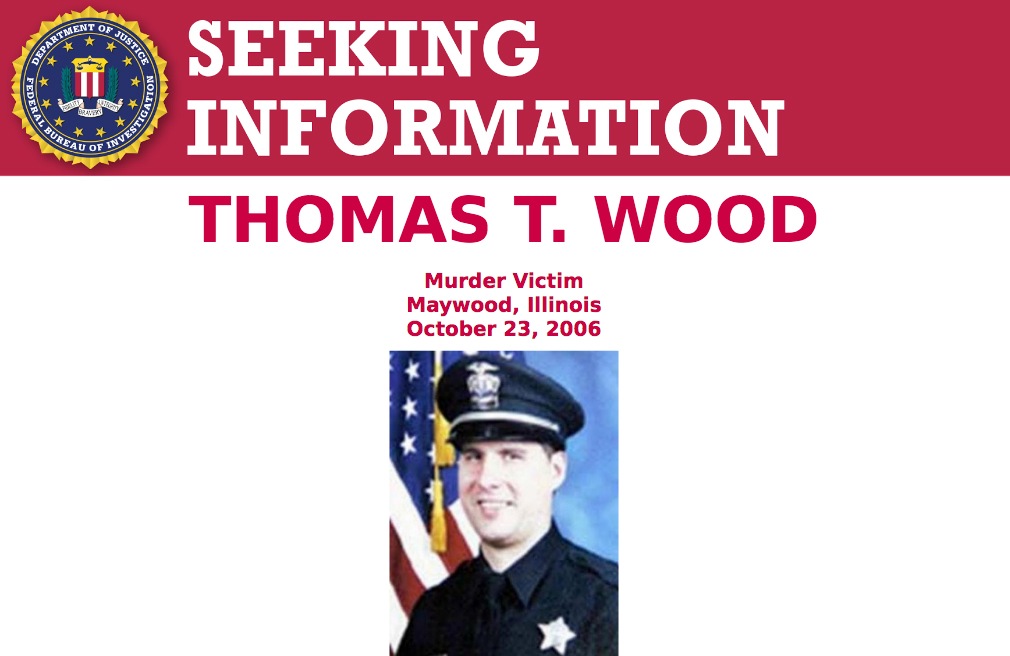 On October 23, 2006, Maywood Police Officer Thomas T. Wood was sitting in his marked patrol SUV near the intersection of 6th Avenue and Erie Street in Maywood, Illinois, when he was shot multiple times in the chest and head by an unknown assailant. Wood subsequently died of his wounds. The weapon used was believed to be a .380 caliber pistol. 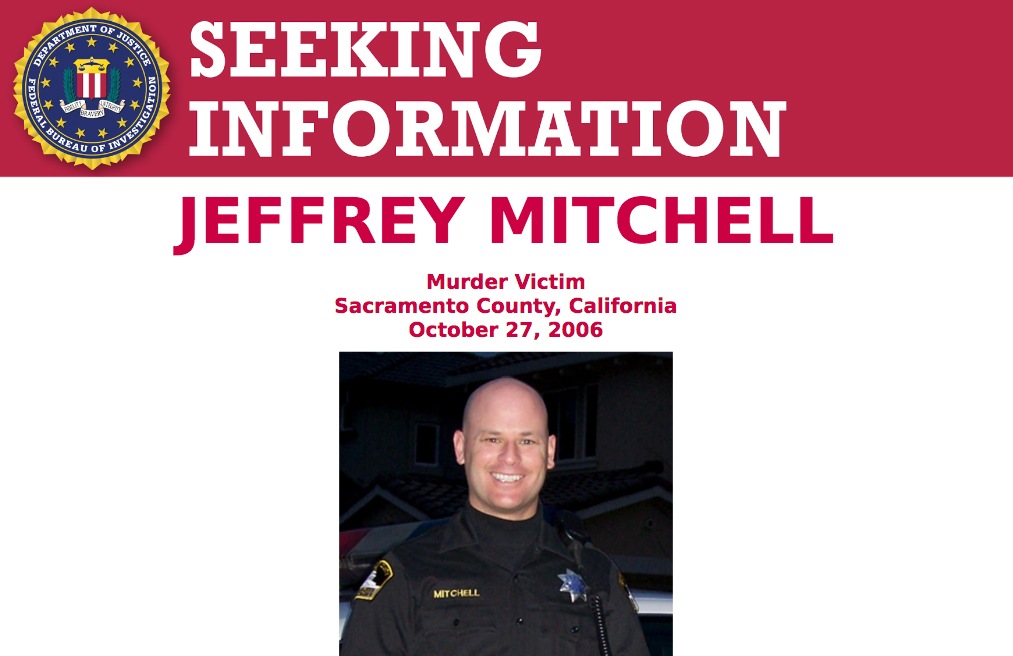 During the early morning hours of Friday, October 27, 2006, Deputy Jeffrey Mitchell was patrolling rural Sacramento County near Meiss and Dillard Roads. At approximately 3:30 a.m., Deputy Mitchell contacted Sacramento County Sheriff’s Department dispatch from his in-vehicle computer saying he was going to stop a white Chevrolet van. A few minutes later, dispatch tried to contact Deputy Mitchell to conduct a welfare check but no response was received from Deputy Mitchell. Other patrol vehicles were immediately dispatched to the location of the vehicle stop made by Deputy Mitchell. When patrol units arrived, they found Deputy Mitchell mortally wounded by a gunshot to the head with his own weapon after a violent struggle.

Seeking Information: Officer Jason Ellis (Deceased)
Reward of up to $50,000 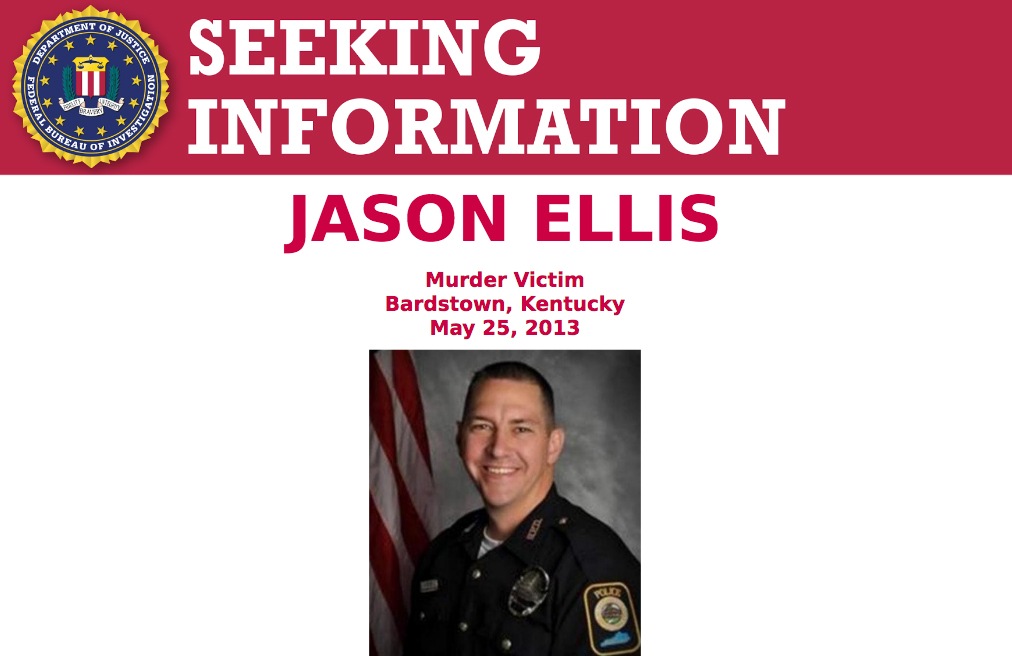 Officer Jason Ellis was killed after finishing his shift for the Bardstown (Kentucky) Police Department during the early morning hours on Saturday, May 25, 2013. While driving home, Officer Ellis encountered debris which has been placed on the exit ramp (exit 34) from the Bluegrass Parkway. As Officer Ellis attempted to remove the debris from the roadway, he was shot and killed. Officer Ellis was discovered by a passing motorist.

Seeking Information: Trooper Johnny Bowman (Deceased)
Reward of up to $50,000 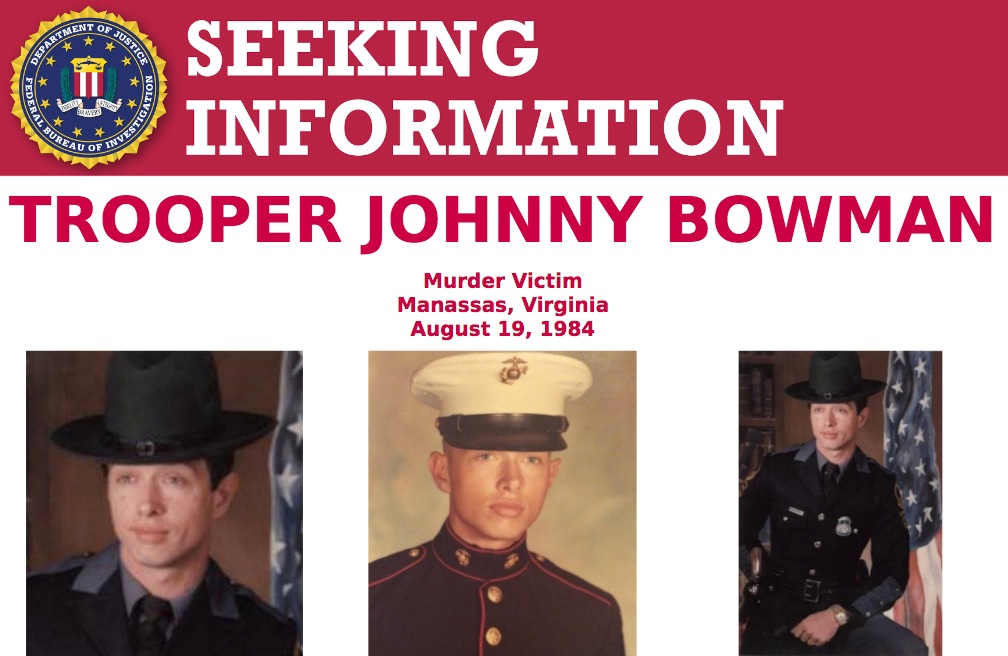 On August 19, 1984, at approximately 4:15 a.m., Virginia State Trooper Johnny Rush Bowman was brutally attacked and stabbed 45 times by an unknown assailant(s) while off-duty at his home located near Patterson Place in Manassas, Virginia. Trooper Bowman, who was unarmed at the time, engaged in a struggle with the individual(s) that awakened his 2-year-old daughter in the home. Trooper Bowman later succumbed to his injuries.

All subjects, identified or not, should be considered armed and dangerous. Please contact the Richmond Division of the FBI at 804-261-1044 or via https://tips.fbi.gov with information that may lead to the identification of the individual(s) responsible for these crimes.

The FBI’s Uniform Crime Reporting Program’s Law Enforcement Officers Killed and Assaulted, 2018 report is an exclusively online publication and may be viewed on the FBI’s website.