In a memorial ceremony this morning, the FBI Richmond Field Office honored the six women and 82 men of the FBI’s law enforcement family who have the distinction of appearing on the FBI’s Wall of Honor—a wall dedicated to recognizing the service and sacrifice of those killed in the line of duty since 1908.

Edwin Shanahan, the first special agent killed in the line of duty, was shot and killed on October 11, 1925, while attempting to arrest a car thief who had wounded several police officers while avoiding capture.

Special Agent Sheila Jean Regan, one of the first female special agents to join the FBI, died on December 1, 1974, in an airplane crash while returning from an out-of-town assignment.

And from one of this country’s most traumatizing and pivotal events, the attacks on September 11, 2001, the FBI lost 18 family members—16 special agents, a Supervisory Investigative Specialist, and an Electronics Technician. These coworkers perished while helping evacuate victims from the Twin Towers, or by the significant health issues brought on by the immediate and sustained work they performed at each of the crash sites.

Special Agents Laura Schwartzenberger and Daniel Alfin are the most recent deaths memorialized on the FBI’s Wall of Honor, when they were shot and killed while agents breached a suspect’s door executing a search warrant.

As law enforcement across the country honors our fallen, during the month of May—we recognize the sacrifice and loss of these heroes, their families, and brothers and sisters in arms. The FBI Richmond Field Office is grateful for the support of our community, as we all work together to ensure a safer community for generations to come.

You are welcome to view additional acknowledgements of FBI personnel killed in the line of duty here. 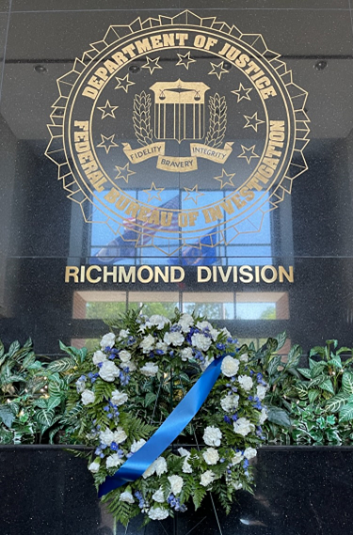