There is a highly competitive process that local law enforcement officers must go through before being selected for this honor. That process includes a nomination by a supervisor; interviews of the candidate and co-workers to determine leadership skills and abilities; a background check; a determination of physical fitness; and the support of former National Academy graduates within the candidate’s organization.

“Only a few law enforcement officers from Oregon have the chance to attend the National Academy each year,” said Loren Cannon, Special Agent in Charge of the FBI in Oregon. “The exceptional leaders selected to participate have a great opportunity to share their experiences with peers and to learn best practices from officers from across the country and the world.”

Lt. Shearer has served at the Portland Police Bureau for 25 years, starting as an officer and being promoted to sergeant and later lieutenant. Over time, he worked in patrol operations, with the Gang Enforcement Team, with the Youth Gun Anti-Violence Task Force, and on the Special Emergency Reaction Team (SERT). As a lieutenant, he served as the executive officer for the Assistant Chiefs of Operations Branch and Community Services Branch. He has also served as an adjutant to the chief. He is currently serving as an acting captain of the Tactical Operations Division for PPB. He holds a bachelor’s degree from Portland State University in Administration of Justice.

“Lt. Shearer has been a leader with the Portland Police Bureau through his career,” said Portland Police Chief Mike Marshman. “I am not surprised that he excelled during his time at the FBI National Academy. I look forward to Lt. Shearer returning to the Bureau where he will be part of the leadership team helping to navigate positive change within the organization.”

During the ten weeks of training, local executive-level law enforcement officers spend most of their time in the classroom. Lt. Shearer took graduate-level courses, including: “Contemporary Issues in Law Enforcement,” “Emotional Intelligence: Leadership, Communication, Media and Managing the Law Enforcement Image,” “Advanced Psychology of Communication” and “Intelligence Theory for Law Enforcement Managers.” The FBI’s National Academy program allows the participants the opportunity to earn college credits through the University of Virginia for their studies. In addition to the classroom work, participants have physical training courses and activities.

Each year, the FBI sponsors four sessions of the National Academy. Each session includes about 220 local law enforcement officers from around the United States as well as from around the world. While in the Academy, the officers and deputies live in a dorm-like setting. The FBI does not charge U.S. students for tuition, books, equipment, meals, lodging, or travel to and from their home. 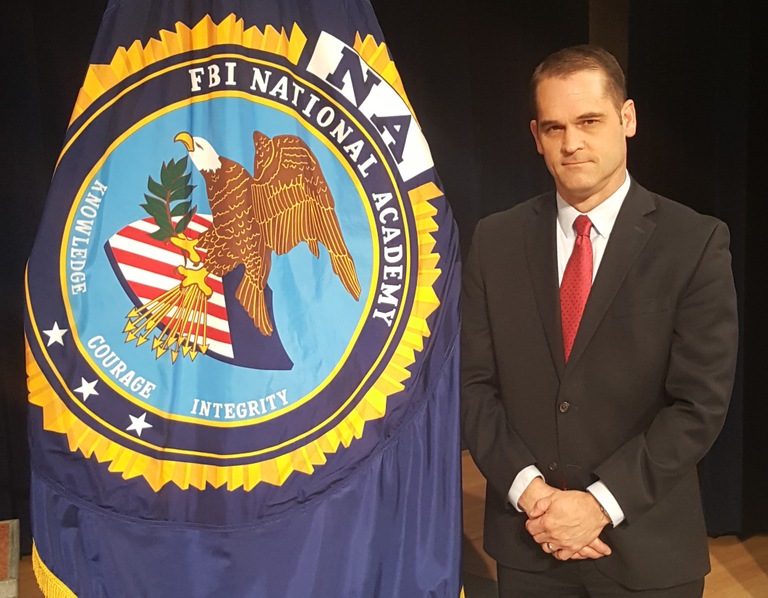