There is a highly competitive process that local law enforcement officers must go through before being selected for this honor. That process includes a nomination by a supervisor; interviews of the candidate and co-workers to determine leadership skills and abilities; a background check; a determination of physical fitness; and the support of former National Academy graduates within the candidate’s organization.

“Only a few law enforcement officers from Oregon have the chance to attend the National Academy each year,” said Renn Cannon, special agent in charge of the FBI in Oregon. “The exceptional leaders selected to participate have a great opportunity to share their experiences with peers and to learn best practices from officers from across the country and the world.”

Deputy Chief Hamilton began his Public Safety career in 1987 with Valley Fire Service in Josephine County as a firefighter. He became a Reserve Police Officer with the Grants Pass Department of Public Safety in 1991 and in 1992 left Valley Fire Service and became a full-time officer. As an officer, Deputy Chief Hamilton worked as a Patrol Officer, Police Corporal, and Public Safety Sergeant. He has also worked as a DARE officer, Field Training Officer, and Bike Team Member. In 1996, he joined the SWAT team and moved through the ranks as an Assistant Team Leader, Team Leader, and Team Commander. He has also supervised the first K9 unit for the department.

Deputy Chief Hamilton has an Associate Degree in Criminal Justice and a Bachelor of Arts Degree in Managerial Leadership from Northwest Christian University. He also holds several police and fire certifications.

“I'm very proud of Jim and his accomplishments during his time at the FBI National Academy,” said Public Safety Director Bill Landis. “His time there along with what he learned will pay dividends in the future for our department.”

During the ten weeks of training, local executive-level law enforcement officers spend most of their time in the classroom. Deputy Chief Hamilton’s classes included Psychology of Leadership; Psychology of Communication; Emotional Intelligence; Fitness in Law Enforcement; Seminar in Media and Managing the Law Enforcement Image; and Contemporary Issues in Law Enforcement. The program allows the participants the opportunity to earn college credits through the University of Virginia for some of those studies. In addition to the classroom work, participants have physical training courses and activities.

Each year, the FBI sponsors four sessions of the National Academy. Each session includes about 220 local law enforcement officers from around the United States as well as from around the world. While in the Academy, the officers and deputies live in a dorm-like setting. The FBI does not charge U.S. students for tuition, books, equipment, meals, lodging, or travel to and from their home. 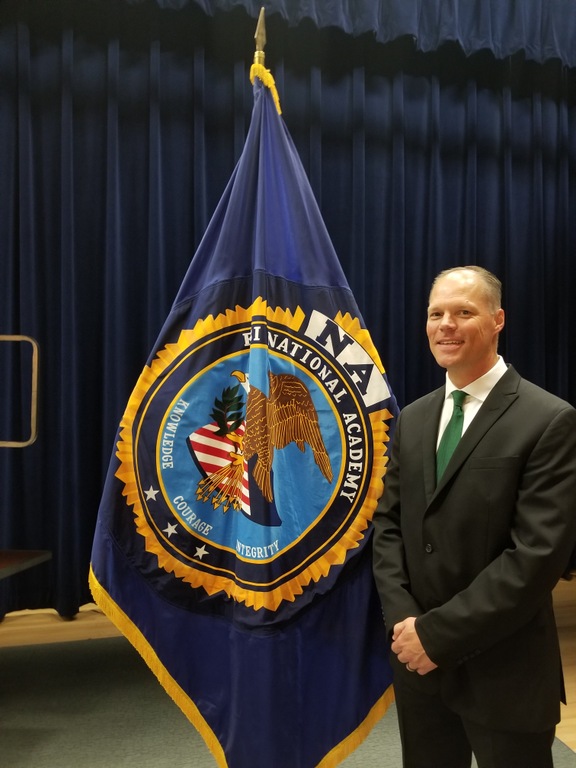