The FBI is asking for the public’s assistance in locating Shawn Frederick Weatherhead, a transient with ties to the Springfield/Eugene area in Oregon; to Eureka, California; and to Reno, Nevada,

Weatherhead has allegedly contacted the FBI’s Public Access Line (PAL) in Clarksburg, West Virginia or other FBI offices around the country, approximately 1,000 times since December 2015 from locations in California, Oregon, and Nevada.

On at least three occasions, between April 1-2, 2017, Weatherhead allegedly threatened to kill people during his calls. A federal judge from the Northern District of California issued an arrest warrant on October 24, 2017, after prosecutors charged him with interstate communication of a threat to injure the person of another.

Weatherhead is a white man with hazel eyes and brown hair. He stands 5'6” in height and weighs approximately 140 pounds. Additionally, he has multiple tattoos on his body, including on his forehead, chin, arm, wrist, hand, right leg, and back.

Among his many tattoos is the word “dork” tattooed along his throat. 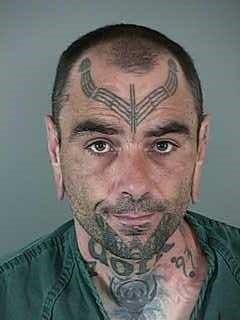