A Road to Safer Streets

A Road to Safer Streets

Power, money, and guns—the forces that drove the brutal violence of the Rollin’ 60s set of the Crips in the Long Island town of Roosevelt. Originating on the West Coast, the Rollin’ 60s set was brought to Long Island in 2003 by three hard core Crips leaders: Raphael Osborn “Gusto,” Daquane Chambers “Dulo,” and Johnny Green “J-Loc.” Though located in Roosevelt, the Rollin’ 60s had a national reach, calling back to their “big homie” in California on a monthly basis to receive orders.

Gang violence on the streets of Roosevelt sparked in 2004, when Rollin’ 60s Crips leaders engaged in weekly shootouts with rival Roosevelt Bloods leaders. This violence continued until it reached its climax in December 2010, when Crips member Eric Smith shot and killed James McClenic, a leader of the Bloods. This murder ignited a perilous gang war between the rival gangs. Within two weeks of the murder, there were close to 40 shootings in Roosevelt. Following these two weeks, there were roughly 20 to 30 shootings a month. From 2010 to 2014, these gangs brought down a reign of terror in Roosevelt.

“The Rollin’ 60s was a different breed of gang,” said Special Agent Derrick Acker. “They were violent and ruthless.” Typically, Crips would not fight another set, but the Rollin’ 60s gang was at war with everyone—Bloods and Crips. Their power, money, and guns allowed them to maintain much territory in Roosevelt. In an effort to protect their turf, members of this set went out every day to shoot their enemies. 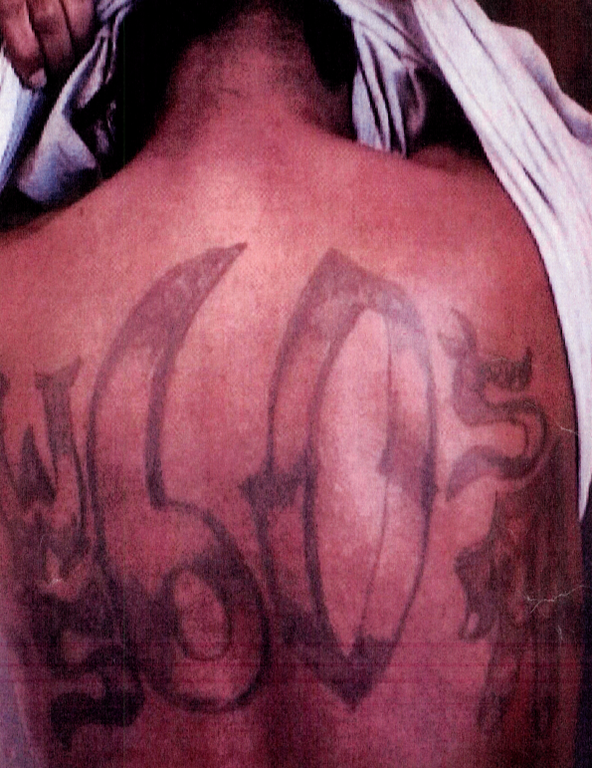 A tattoo displaying association with the Rollin’ 60s set

Following the dismantlement of the Rollin’ 60s, there was a steep decline in violence. Shootings in connection with the Rollin’ 60s decreased by more than 70 percent. Formerly the home of weekly shootouts, Roosevelt went 109 days without a shooting incident. Having a positive impact on the communities we serve holds such vital importance at the FBI, as this is one of the many things that drives our investigations. Specifically, on our gang task force, making a memorable difference in our neighborhoods is the fuel to our fire. Composed of law enforcement officials from state, local, and federal levels, the members of our gang task force bring diversified ideas and perspectives to accomplish one goal. As gang violence plagues and poisons various communities, we work tirelessly to eradicate these gangs, making our country safer—one investigation at a time.