On Saturday, May 9, 2015, the FBI’s New York Field Office, along with 18 other law enforcement organizations, hosted the Fifth Annual Muslim Youth Career Day at Kingsborough Community College in Brooklyn. More than 600 children attended the event from local schools. The Career Day gives school children an opportunity to speak with representatives from various law enforcement agencies. The goal is to help these young men and women better understand the role of law enforcement and inspire them to consider a career with the FBI.

The day kicked off shortly after 10 a.m. with welcoming remarks by Assistant Director in Charge Diego Rodriguez, who said, “The goal of this event is to open the lines of communication between members of law enforcement and the communities we are sworn to protect.” Mohammad Razvi, the director of the Council of Peoples Organization (COPO), also welcomed the children to take in the lessons of the day. COPO helped organize the event with other community leaders. 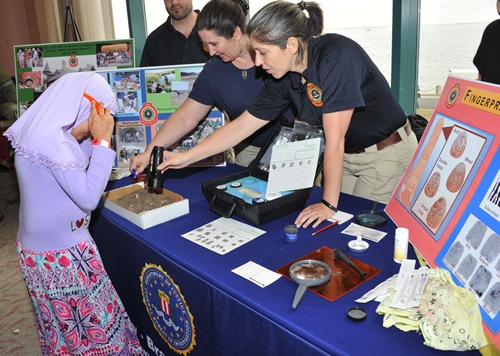