Richard Zabel, the Deputy United States Attorney for the Southern District of New York, and Diego Rodriguez, Assistant Director-in-Charge of the New York Field Office of the Federal Bureau of Investigation (“FBI”), announced today the return of two antique books that were stolen from the National Library of Sweden in the 1990s.

Deputy U.S. Attorney Richard Zabel said: “For hundreds of years, the National Library of Sweden’s collection of books, maps, and manuscripts was treasured by the kings and queens of Sweden. In many ways, the Library contains the cultural memory of Sweden. The theft of pieces of a nation’s memory and heritage creates holes in its intellectual soul. There is no repair for such holes without the recovery of what was taken. I’m proud that this Office has been at the forefront of recovering what has been taken from many different nations’ cultural histories, including Sweden today.”

FBI Assistant Director-in-Charge Diego Rodriguez said: “We are honored to be part of reparation ceremonies, like the one we are holding here today, because we are able to return a piece of missing history to a country. The books returned today are a significant part of Sweden’s history. The FBI will continue to work with our law enforcement partners to investigate and hopefully return stolen artifacts and cultural items to their home countries.”

The two books being returned are part of a group of at least 56 rare or one-of-a-kind books that were stolen from the National Library of Sweden’s collection by Anders Burius (“Burius”), a former employee of the Library, between 1995 and 2004. After stealing the books, Burius consigned or sold the books to Ketterer Kunst (“Ketterer”), an auction house in Germany. In 2004, Burius confessed to the book thefts and admitted to Swedish law enforcement officials that he had sold and/or consigned the books to Ketterer under the alias “Carl/Karl Fields.” Shortly after confessing to the thefts, Burius committed suicide. Swedish authorities subsequently received information that 13 of the stolen books had been sold by Ketterer to individuals and/or entities in the United States.

The United States Attorney’s Office for the Southern District of New York entered into stipulations with Cornell University and the gallery owner, in which both Cornell University and Lan consented to tender their respective books to the FBI, to allow for the return of these books to the National Library of Sweden. The stipulations were so ordered by the United States District Court on June 1, 2015. The Scheiner book and the Sabbatini book were returned to representatives of the National Library of Sweden earlier today at a repatriation ceremony held at the United States Attorney’s Office in New York.

A list of missing books stolen from the National Library of Sweden between 1995 and 2004 can be found here.

Mr. Zabel praised the investigative work of the FBI in this matter, and its ongoing efforts to find and repatriate stolen property. 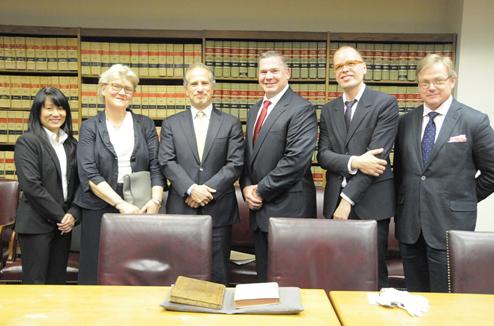 This matter is being handled by the Office’s Money Laundering and Asset Forfeiture Unit. Assistant U.S. Attorneys Christine I. Magdo and Sarah E. Paul are in charge of the case.