Preet Bharara, the United States Attorney for the Southern District of New York, and Diego Rodriguez, Assistant Director-in-Charge New York Field Office of the Federal Bureau of Investigation (“FBI”), announced today the return of a 1734 Stradivarius violin to the heirs of deceased violinist Roman Totenberg today at a ceremony at the United States Attorney’s Office in Manhattan. The violin was stolen from Mr. Totenberg in 1980. It was recently recovered by the FBI, following a tip to a New York City Police Department (“NYPD”) detective’s source about the stolen violin. The detective exercised due diligence and conducted an initial assessment before passing the case along to the FBI’s Art Crime Team.

Manhattan U.S. Attorney Preet Bharara said: “Today, we return to its rightful owners the centuries-old Ames Stradivarius, stolen thirty five years ago from renowned violinist Roman Totenberg. This is a remarkable story of a quick-witted violin appraiser who recognized the long-lost Ames Stradivarius and immediately called law enforcement. Thanks to the violin appraiser’s good citizenship and law enforcement’s prompt response, today we celebrate the Totenberg family’s reunion with a priceless family heirloom, thought for decades to have been lost forever—a joyful ending to an amazing story.”

Assistant Director-in-Charge Diego Rodriguez said: “Today’s ceremony is just one example of our commitment to restore significant arts and antiquities to their rightful owners. We will continue to provide investigative support to address these criminal matters. Many thanks to our partners at the U.S. Attorney’s Office for the Southern District of New York and the New York City Police Department for their continued partnership in this and so many investigations. I’d like to remind the public that two antique bows were stolen along with the Ames Stradivarius. We ask anyone with information to please contact the FBI’s Art Crime Team in New York at (212) 384-1000 as we work to return this stolen property to the Totenberg family.”

According to court filings and other publicly available information:

The violin, known as the “Ames” Stradivarius after violinist George Ames, the owner of the violin in the late 19th Century, was made in 1734 by Antonio Stradivari, a luthier based in Cremona, Italy. Between 1666 and 1737, Stradivari created over 1,000 instruments, including approximately 400 violins that are known to exist today. Stradivari’s violins are widely considered to be of the highest quality of craftsmanship. 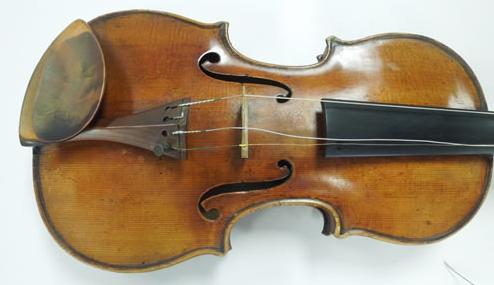 Photo of the Ames Stradivarius, taken shortly after it entered FBI custody. The strings, bridge, fine tuner, tailpiece, and chinrest have now been removed to reduce tension on the instrument.

View of the words “Antonius Stradivarius Cremona” inside the left F-Hole.

In 1980, the Ames Stradivarius was owned by Roman Totenberg, a Polish-born violinist who immigrated to the United States in 1938. Totenberg enjoyed a long and distinguished career as a performer and a teacher. He was chair of the strings department at Boston University from 1961 to 1978; the director of the Longy School of Music in Cambridge, Massachusetts, from 1978 to 1985; an instructor at various conservatories across the country; and co-chairman of the Boston University strings department for a second time beginning in 1994. Mr. Totenberg passed away in 2012.

In May 1980, following a concert at the Longy School, the Ames Stradivarius was stolen, along with two antique bows also belonging to Totenberg.

On June 26, 2015, after having been missing for over 35 years, the Ames Stradivarius surfaced at a hotel in Manhattan, where it was being presented for appraisal by an individual who had received the violin from a former spouse. After being contacted by the appraiser, the FBI approached the individual, who voluntarily relinquished the Ames Stradivarius to a special agent assigned to the FBI’s Art Crime Team. After contacting the heirs of Roman Totenberg, the U.S. Attorney’s Office and the FBI have arranged for the return of the Ames Stradivarius to the Totenberg family.

The return today to Mr. Totenberg’s three daughters is being made pursuant to stipulated agreements that have been entered between the relevant parties and also so ordered by the Honorable Lorna G. Schofield, United States District Court Judge for the Southern District of New York.

Mr. Bharara thanked the FBI and the NYPD for their outstanding work on this matter.

The case is being handled by the Office’s Money Laundering and Asset Forfeiture Unit. Assistant U.S. Attorney Andrew C. Adams is in charge of the case.