Australian Prime Minister, the Honorable Tony Abbott, visited the FBI’s Joint Terrorism Task Force (JTTF) in Manhattan for a threat briefing today. The prime minister and his senior advisers were also briefed on the success of the task force model, investigative strategies, and cooperation between law enforcement and intelligence agencies. 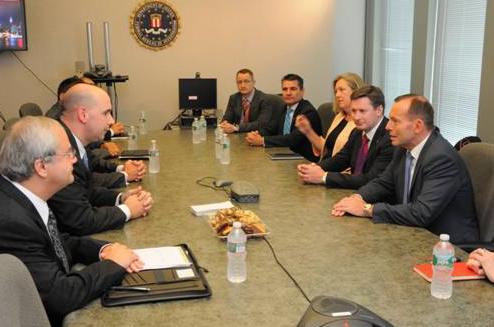 The meeting follows Australia’s largest terror raid ever on September 18, 2014, when there were 15 people detained on terrorism offenses. More than 800 officers participated in the raids and searches.

“The relationships between Australian and U.S. law enforcement agencies are extremely strong,” said Australian Prime Minister Tony Abbott. “It is, of course, absolutely critical that we have this ability to exchange intelligence and capabilities in order to keep our communities safe from terrorist activity, in a timely way.”

“While there is no specific or credible threat to New York, we place tremendous emphasis on having strong relationships with our partners at every level,” said FBI Assistant Director in Charge George Venizelos. “Terrorism can’t be fought alone; it must be fought together. In light of the recent terror raids in Australia, today’s meeting is the latest example of that cooperation. We place great value in our relationships, particularly with our Five Eyes partners.”

“The NYPD has a long, close relationship with Australian law enforcement community, including ongoing exchanges with the Australian Federal Police and the New South Wales Police,” said New York City Police Commissioner William J. Bratton. “The opportunity to discuss those partnerships, as well as our counterterrorism and intelligence programs, is a great one. As nations and police agencies, we face extraordinarily similar threats and the threats on opposite ends of the globe.”