The FBI is releasing information about a robbery of an armored car courier today, January 8, 2020, in North Miami Beach, Florida, at approximately 4 p.m. as the armored car courier was servicing an ATM at the rear of a Wells Fargo bank branch located at 147th Street and Biscayne Boulevard.

While the ATM was being serviced, a robber drove up near the ATM (in a blue Honda Civic), exited his vehicle, and approached the courier.  After an exchange of words, the robber grabbed a cartridge containing money.  In the ensuing moments, the courier fired his weapon at the robber.  It is unknown if the robber was struck.  The robber re-entered his vehicle (driver) and left the area.  The amount of money taken will not be disclosed at this time.

Attached is a picture of the rear of the Honda Civic (Florida license plate PZZ K67).

The FBI issues press releases for matters of public safety and/or requests for public assistance/information.   Anyone with information about this case or any FBI investigation is urged to call (754)703-2000. 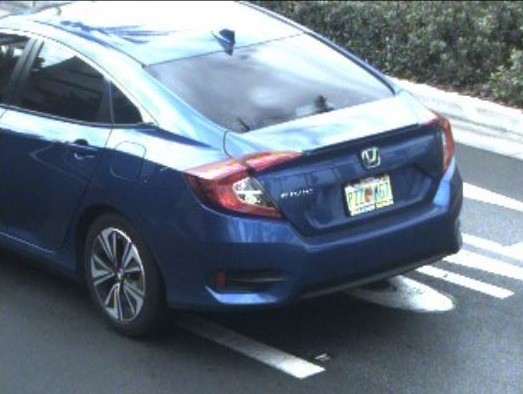