A man who has been living as a transient has been arrested by sheriff’s deputies in Santa Clara County, California, and is charged federally with tampering and attempting to tamper with consumer products, announced Paul Delacourt, the assistant director in charge of the FBI’s Los Angeles Field Office; and Nick Hanna, the United States attorney in Los Angeles.

The FBI in Los Angeles was recently notified by supermarket investigators of a man seen on videotape entering some of their markets who then obtained bleach readily available on shelves and proceeded to pour the bleach in freezers that contained packaged consumer products.

David Clare Lohr, 48, was charged in a federal criminal complaint in U.S. District Court in Los Angeles with tampering and attempting to tamper with consumer products. Agents had been seeking Lohr’s whereabouts until his arrest in Northern California last week.

On Wednesday, February 6, deputies with the Santa Clara County Sheriff’s Office arrested Lohr in Sunnyvale, California, after the sheriff’s office and the Sunnyvale Department of Public Safety received a report of a male spreading white powder and hydrogen peroxide aboard a public bus (powder later determined to be salt).

Further investigation by Santa Clara County deputies led to a person matching the description of the suspect located at a bus stop in Los Altos, California. Deputies found the FBI warrant for Lohr after doing a records check and took Lohr into custody, where he currently remains. Deputies conducted further investigation and determined that Lohr had allegedly poured hydrogen peroxide on or near rotisserie chickens at a Sunnyvale supermarket.

Lohr is believed to have poured bleach into refrigerators or freezers while the grocery store locations were open to the public. Bleach contains hazardous chemicals that can cause serious eye irritation, skin irritation, nausea, vomiting, and diarrhea. 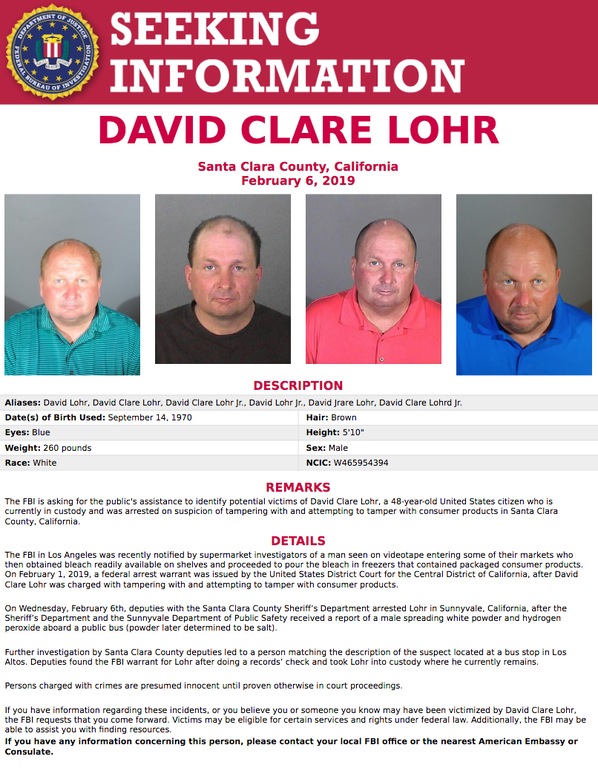 To date, there have been no known reports of individuals sickened by Lohr’s actions; however, further investigation has determined that Lohr has done this in a variety of stores, and the extent of his actions are currently under investigation.

The FBI and our law enforcement counterparts would like to hear from anyone who believes they have been affected in any way by Lohr’s alleged actions, or anyone who may have information about the allegations against Lohr. Members of the public may call 1-800-CALL-FBI.

The federal criminal complaint and photographs of Lohr are being made available to the public. Lohr is described as a white male, approximately 5’10,” 260 lbs., and has blue eyes. Lohr is believed to have recently resided in short-term lodging throughout California. He is known to use public transportation to move between cities.

A complaint contains allegations that a defendant has committed a crime. Every defendant is presumed to be innocent until proven guilty in court.