Paul Abbate, Special Agent in Charge of the FBI Detroit Field Office, and Sheriff Richard Fuller of the Kalamazoo County Sheriff’s Office announced a reward of up to $12,000 (offered collectively by PNC Bank and Comerica Bank) for information leading to the arrest and conviction of the individual(s) responsible for the May 29, 2014 robbery of a PNC Bank in Galesburg, Michigan, and the July 29, 2014 robbery of a Comerica Bank in Comstock Twp., Michigan.

During both robberies, the robber brandished a handgun, violently took over the bank, demanded cash, and forced employees into the vault at gunpoint. Authorities believe the robberies may be related.

On May 29, 2014, the PNC Bank branch on West Michigan Ave. in Galesburg, Michigan, was robbed by a black male armed with a black revolver handgun. The suspect is described as approximately 5’10” to 6’0” tall with a thin build, in his mid-20s, and having unique pigment discoloration on his upper and lower lips. The robber wore a brown baseball cap over a brown towel draped on his head, dark navigator-style sunglasses, a black T-shirt, brown jacket, and tan pants, and he carried a black messenger-style saddle bag. The robber used a walkie-talkie radio and fled on-foot to a small/medium sized blue four door sedan parked at the Galesburg United Methodist Church. The vehicle was driven by a second unknown male, and they fled west bound on Battle Creek St.

Digital images of the Bank Robber at PNC Bank

On July 29, 2014, the Comerica Bank branch on King Hwy. in Comstock Twp., Michigan, was robbed by a black male armed with a silver semi-automatic handgun. The suspect is described as approximately 5’10” to 6’0” tall with a thin build. The robber wore a full-sleeved, black hooded sweatshirt and gray sweatpants with double vertical stripes, and he covered his face with a dark cloth. The robber fled westbound on-foot to an unknown vehicle staged north of the bank, possibly in the Veterans of Foreign Wars, Comstock Post parking lot on East Michigan Ave. 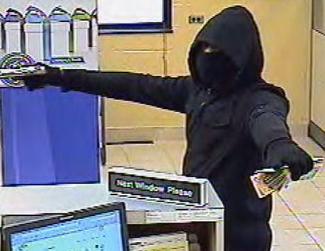 The case is being investigated by the FBI Kalamazoo Office and the Kalamazoo County Sheriff’s Office. Members of the public should not try to apprehend any suspect(s). Anyone with information related to the May 29, 2014 robbery of the PNC Bank branch in Galesburg, Michigan and/or the July 29, 2014 robbery of the Comerica Bank branch in Comstock Twp., Michigan may contact the FBI Detroit Field Office 24 hours a day (313-965-2323 or https://tips.fbi.gov), the FBI Kalamazoo Office (269-349-9607), the Kalamazoo County Sheriff’s Office (269-383-8748), or Kalamazoo County Silent Observer (269-343-2100 or www.kalamazoosilentobserver.com).

Every defendant is entitled to a fair trial in which it will be the government’s burden to prove guilt beyond a reasonable doubt.