Fugitive Antwan Tamon Mims marks the 519th addition to the Ten Most Wanted Fugitives list. Mims should be considered armed and extremely dangerous.

Mims is wanted for the March 25, 2018 murders of Cortez Lamont Miller and Michael Canthrell Johnson while they were attending a house party on Lavette Street in Benton Harbor, Michigan. Investigators believe Mims, who is a known member of the Gangster Disciples Street Gang, walked up to the two men as they stood together in the front yard and gunned them down in front of approximately 100 people. As both victims were lying on the ground injured, Mims allegedly shot Miller in the back of the head and Johnson in the face, and then walked away. 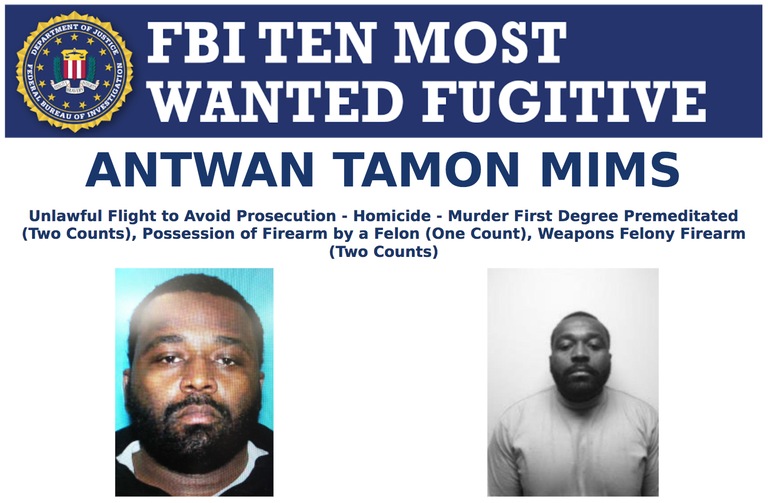 Select image for related materials, including story and poster.

A state arrest warrant was obtained on March 27, 2018, charging Mims with two counts of first-degree premeditated murder, possession of a firearm by a felon, and two counts of weapons felony firearms. On May 2, 2018, the Detroit FBI’s St. Joseph Resident Agency Safe Streets Task Force obtained a federal arrest warrant for unlawful flight to avoid prosecution. Mims has family and other personal ties to Michigan, Indiana, Georgia, Tennessee, Illinois, and Ohio.

“The callous indifference with which Mims carried out his murders has rightly placed this violent and dangerous fugitive on the FBI’s Ten Most Wanted Fugitives list,” stated Timothy R. Slater, special agent in charge of the FBI’s Detroit Field Office. “Our need for the public’s assistance cannot be overstated, and we urge anyone with information related to Mims or his horrific crimes to come forward. The investigative resources of the FBI, Benton Harbor Department of Public Safety, and Michigan State Police are fully dedicated toward protecting our communities from this menace to society. We will never forget, nor will we rest until Antwan Tamon Mims is located, captured, and brought to justice for his crimes.”

“Antwan Mims is extremely dangerous, and nobody is safe while this individual remains at large,” said Daniel E. McGinnis, Jr., director of the Benton Harbor Department of Public Safety. “We are asking for the community’s assistance in locating Mims and beginning the first step of the healing process for the victims’ families.”

“This suspect acted boldly and with no concern to the public around him while committing these murders,” stated Captain Kyle Bowman, commander of the Michigan State Police Fifth District. “The faster we locate him and take him into custody, the safer our community will be. We ask the public to provide any information that could help us capture him as quickly as possible before he kills again.”

“The crimes that Antwan Mims committed back on March 25 of this year were ruthless and calculated,” said Berrien County Sheriff L. Paul Bailey. “This will not stand in our county, and we are bringing all the resources of multiple partner agencies to bring this individual to justice. In order to do that, we are asking for the public’s assistance. If you know of Mims’ whereabouts, please call law enforcement and help us take this killer off the streets.”

“Mr. Mims’ arrogance in believing he can execute two individuals while a crowd looks on because of the fear the community has for him makes him extremely dangerous,” stated Berrien County Prosecutor Michael J. Sepic. “In order to prevent heartache for more families, we need help locating him and let the criminal justice process proceed.”

“Mims’ placement on this list is a mark of the seriousness of the crimes for which he is charged and of how important it is that he be captured and face those charges,” said Andrew B. Birge, U.S. Attorney for the Western District of Michigan.

The FBI is offering a reward of up to $100,000 for information leading directly to the arrest and conviction of Antwan Tamon Mims. Those with information concerning Mims should not take action themselves, but should immediately contact the nearest FBI office or local law enforcement agency.

The investigation into the murders of Cortez Lamont Miller and Michael Canthrell Johnson is being led by the Benton Harbor Department of Public Safety and the Michigan State Police Major Crimes Unit; the FBI Benton Harbor Safe Streets Task Force is assisting with the murder investigation and leading the federal unlawful flight to avoid prosecution case regarding Mims.

Please call in tips to 1-800-CALL-FBI (1-800-225-5324). Tips can also be submitted online at https://tips.fbi.gov. For possible sightings outside the United States, please contact the nearest U.S. Embassy or Consulate. The FBI’s Detroit Field Office can be reached at (313) 965-2323. Additional information concerning Mims, including his wanted poster and the FBI’s Ten Most Wanted Fugitives list, can be found by visiting www.fbi.gov.