The FBI Rocky Mountain Safe Streets Task Force, Denver and Aurora Police Departments need your help locating Cody Michael Giron, who is believed to be responsible for three bank robberies and one attempted bank robbery in Aurora and Denver, Colorado, since late October. The banks where the robberies occurred are:

Giron is described as a white male, approximately 5’8” in height, with a medium build. In each of the robberies he was seen wearing a black, hooded jacket. He’s been observed wearing an orange Denver Broncos baseball hat, a black and white patterned face mask, and a blue and orange Colorado hat.

During the robberies, Giron is believed to have entered the banks, approached the teller, presented a note, and then fled the banks. No weapon was mentioned or displayed.

Please be on the lookout for Giron or anyone matching the suspect’s description. Be aware of anyone similar who might have recently changed their spending habits or discussed coming into money suddenly.

Bank robbery is punishable up to a 20-year prison sentence for each offense and increases if a dangerous weapon is used in the commission of the crime.

The FBI continues to provide financial institutions with the best practices for security to make them less vulnerable to robberies.

If anyone has any information on the bank robberies above, or any bank robbery, please call the FBI Rocky Mountain Safe Streets Task Force at 303-629-7171; or you can remain anonymous and earn up to two thousand dollars ($2,000) by calling CRIMESTOPPERS at 720-913-STOP (7867). 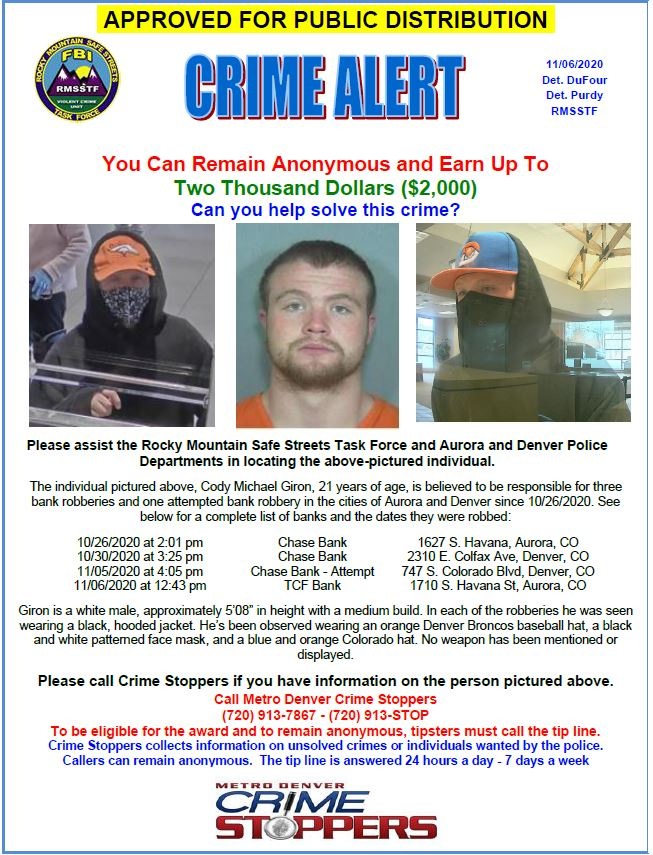