FBI Special Agent in Charge (SAC) of the Chicago Field Office Jeffrey S. Sallet and Chief Richard Shore of the Burbank Police Department (BPD) in Illinois announced today the addition of an alleged murderer, Arnoldo Jimenez, to the FBI’s list of Ten Most Wanted Fugitives.

Jimenez, 37, is the 522nd fugitive to be named to the FBI’s list of Ten Most Wanted Fugitives, which has been in existence since 1950. Jimenez is being sought for his alleged involvement in the murder of his new wife the morning after their wedding. He should be considered armed and dangerous.

On May 12, 2012, Jimenez allegedly stabbed his wife to death in his black, four-door, 2006 Maserati, then allegedly dragged her body into the bathroom tub of her apartment in Burbank, Illinois. Jimenez was charged with first degree murder by the Circuit Court of Cook County, Illinois, and a state warrant was issued for his arrest on May 15, 2012. A federal arrest warrant was issued by the United States District Court, Northern District of Illinois, Eastern Division, on May 17, 2012, after Jimenez was charged federally with unlawful flight to avoid prosecution. 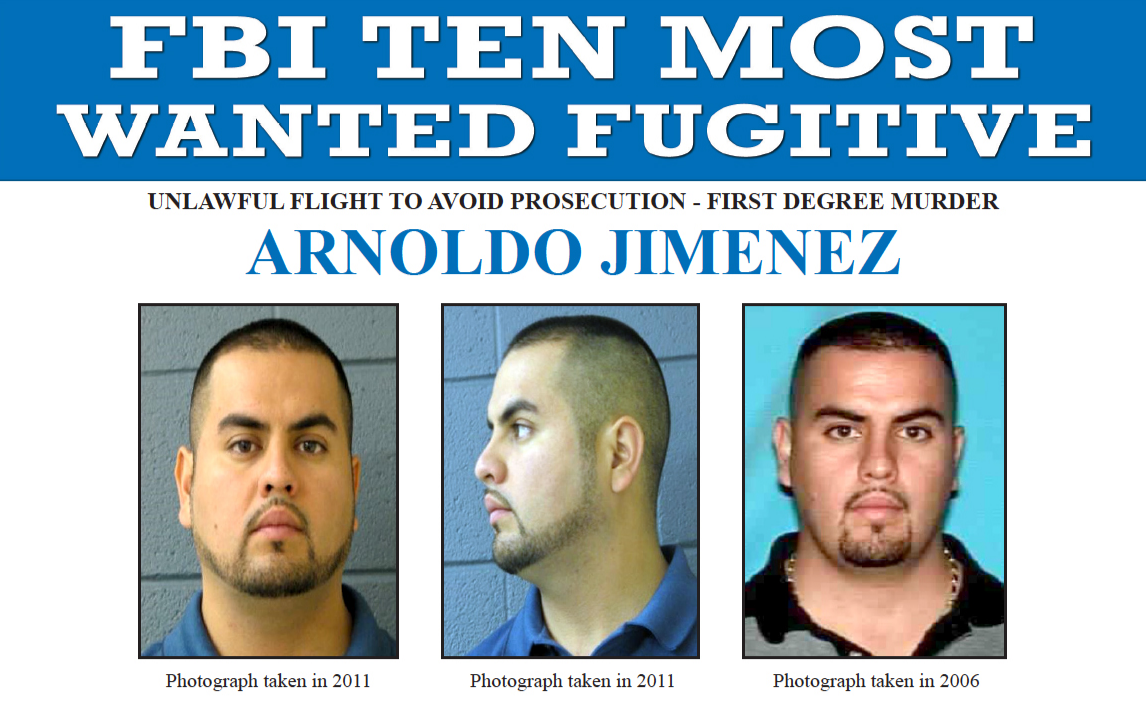 Select to view related story, poster, and other information

“Arnoldo Jimenez is accused of brutally stabbing his wife to death just hours after their wedding. Because of this horrific crime, a family has forever lost their mother, daughter, and sister,” said SAC Sallet. “Our local, state, and federal partners have worked tirelessly on this investigation, and we are now asking for the public’s assistance to ensure that Jimenez is swiftly brought to justice.”

“I first want to express my condolences to the victim’s family for their tragic loss seven years ago, and thank the FBI for their assistance, commitment, and dedication in our investigation,” said Chief Shore. “This collaborative partnership will continue until Arnoldo Jimenez is apprehended and brought to justice, and I ask for the public’s assistance in locating Arnoldo Jimenez.”

Jimenez may have fled to Durango, Mexico, specifically in the area of Santiago Papasquiaro. He may also frequent Reynosa, Tamaulipas, Mexico. He has previously resided in Chicago, Illinois.

Jimenez also uses the aliases Arnoldo Gimenez and Arnoldo Rochel Jimenz. He is described as follows:

The FBI’s Ten Most Wanted Fugitives list was established in March 1950. Since then, 488 fugitives have been apprehended or located; 162 of them were apprehended as a result of citizen cooperation.

The FBI is offering a reward of up to $100,000 for information leading to the arrest of Arnoldo Jimenez. Anyone with information concerning Jimenez should take no action themselves, but should immediately contact the nearest FBI office or local law enforcement agency.

All information can remain anonymous and confidentiality is guaranteed. Individuals from outside of the United States should contact the nearest U.S. Embassy or Consulate. Calls may also be directed to 1-800-CALL-FBI (1-800-225-5324). The FBI’s Chicago Field Office may be reached at 312-421-6700.

This fugitive investigation is being conducted by the FBI’s South Suburban Major Crimes Task Force (SSMCTF) in Chicago. Formed in 1999, the SSMCTF is comprised of 58 south and southwest suburban departments, along with personnel from the Cook County Sheriff’s Police Department, Illinois State Police, and federal partners. The SSMCTF has approximately 150 investigators and crime scene personnel at its disposal, serving a population area of approximately one million.