November 30, 2018 Update: Hania Aguilar has been found deceased. The FBI and Lumberton Police Department are continuing the investigation to find the person responsible for kidnapping and killing Hania Aguilar, and the FBI is offering a reward of up to $25,000 for information that leads to the arrest and conviction of the person responsible. No arrest has been made in connection to this investigation. Anyone with information is encouraged to call the tip line at (910) 272-587.

November 8, 2018 Update: The stolen SUV used in the kidnapping of Hania Aguilar was found just before 8:00 a.m. on November 8 off Quincey Road in Lumberton. The FBI’s Evidence Response Team will process the vehicle. The search for Hania continues. If you live or own a business on or around Quincey Road and have a video surveillance camera system, please call our tip line at (910) 272-5871.

The Lumberton Police Department and the FBI have uncovered a photo of the SUV wanted in connection with the kidnapping of 13-year-old Hania Noelia Aguilar.  The stolen SUV was spotted on a surveillance camera in Lumberton.  Investigators have been collecting and analyzing surveillance video since Hania was taken from her home on November 5, 2018.  The image was captured near her home minutes after the kidnapping.

We are asking anyone in the Lumberton area who may have a camera or video surveillance system to save the video and contact the tip line immediately at 910-272-5871.  Even if you do not see the vehicle in your video, please call the tip line anyway, as it may still contain important information. 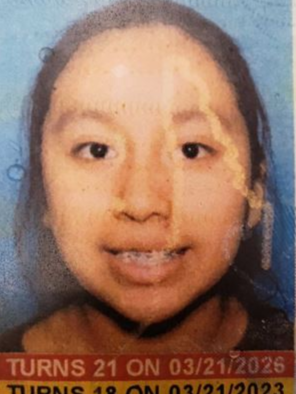 Hania was outside her home at the Rosewood Mobile Home Park located at 3525 Elizabethtown Road, Lumberton, North Carolina, on November 5, 2018, just before 7:00 a.m.  She was waiting on the rest of the family to come outside and drive to school.  A witness saw a male subject dressed in all black and wearing a yellow bandana force Hania into a relative’s vehicle that was parked in the driveway.  The vehicle is a green, 2002/2003 Ford Expedition with South Carolina license plate NWS-984.  The paint on the hood is peeling and there is a Clemson sticker on the rear window.  An Amber Alert was issued.

Hania is a Hispanic female, 5'0" tall, weighing approximately 126 pounds.  She has black hair and brown eyes.  She was last seen wearing a blue shirt with flowers and blue jeans.  Hania’s family is working with law enforcement and fully cooperating with investigators to locate the teen.  The FBI Victim’s Assistance Specialist is also working with the family during this difficult time.  Hania's mother asks whoever took her daughter to please bring her back home.

The 911 call to report Hania’s abduction was made by a neighbor when a relative ran over to get help.  The call came in to the Robeson County Communications Center at 6:54 in the morning on November 5, 2018.  A female caller speaking Spanish was on the line, and the Robeson County dispatcher quickly requested a Spanish translator to join the call.  Initial reports during the 911 described the abductor as a black male.  During follow-up interviews, investigators determined the witness had not seen the race of the abductor because he was wearing all black, including long sleeves and a yellow bandana over his face.  The information was transferred to the Lumberton Police Department who received the call at 6:58 a.m.

Call 911 if you see the stolen, green, 2002/2003 Ford Expedition with South Carolina license plate NWS-984.  The Lumberton Police Department has set up a special tip line to call if you have information to help investigators find Hania at 910-272-5871.  Missing posters are now available in English and Spanish on www.fbi.gov.

The vehicle is similar to the vehicle parked in the victim’s driveway, which was stolen by the suspect and used to abduct Hania.