John A. Strong, Special Agent in Charge of the Charlotte Division of the FBI has chosen Christopher Suggs as the 2016 Director’s Community Leadership Award (DCLA) recipient for North Carolina. Christopher is 16 years old and passionate about helping other teenagers in his hometown, Kinston, North Carolina.

Christopher started his own non-profit organization called Kinston Teens, Inc. His goal is to empower teens through service, leadership, and civic engagement. He has organized community beautification projects, voter registration drives, mentoring programs for children, and youth leadership seminars. He is also the co-founder and development director for Black Youth Network, which works to connect and empower young African American leaders and influencers who are making meaningful differences and contributions to society.

Christopher’s work has already been recognized by North Carolina state leaders. He was appointed to the North Carolina Governor’s Crime Commission in 2016. The commission advises the Governor and Secretary of Public Safety on issues relating to crime, justice, and law enforcement. Chris is also a member of the Juvenile Justice Planning Committee. Most recently, he became a member of a nine person advisory board for Facebook called inspirED, a program developed in partnership with Yale Center for Emotional Intelligence.

Since 1990, through the DCLA, the FBI has publicly recognized the achievements of individuals and organizations who have gone above and beyond the call to service by making extraordinary contributions to their communities in the areas of terrorism, cyber, drug, gang, or violence prevention and education. Chris is an inspiration as a young person with heart and passion for youth in his community.

FBI Director James B. Comey will formally recognize Christopher Suggs as North Carolina’s DCLA recipient during the Director’s Community Leadership Award ceremony at FBI Headquarters in Washington, D.C., on April 28, 2017. He received a certificate from FBI Charlotte leaders today at the city council meeting in Kinston. 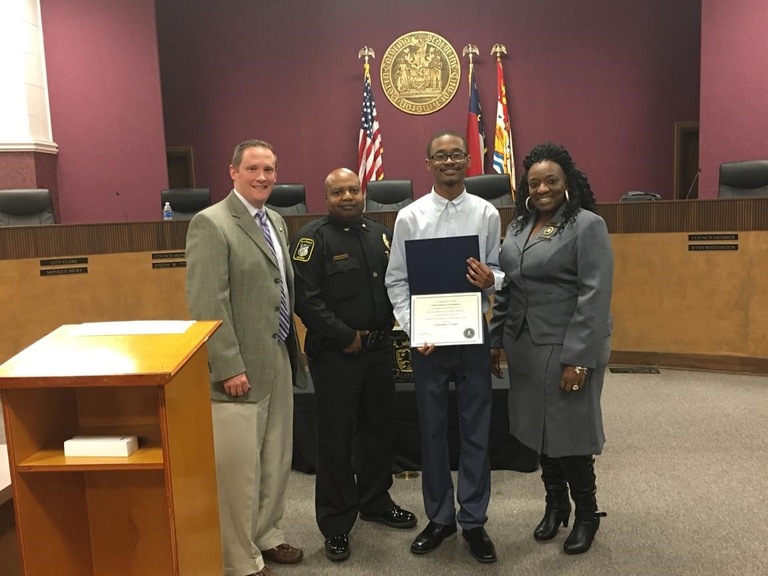