Up to $5,000 Reward Offered for Information Leading to Identification and Arrest of Serial Bank Robber

The white male suspect fled each scene on foot. He’s described as being in his 40s to early 50s, approximately 5’7” to 5’8” in height, with a medium build. In each robbery, he was seen wearing a baseball hat covered by a hooded jacket.

During each of the robberies, the suspect passed notes to the tellers, threatened a weapon, and demanded cash. The “One Minute Bandit” told each teller that they had exactly one minute to empty their drawers and turn over whatever money they had. 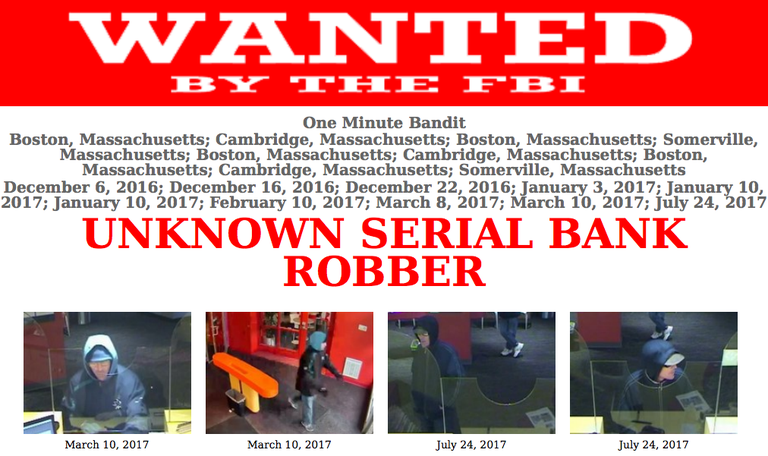 This individual is allegedly responsible for the following robberies:

“We’re seeking the public’s help in identifying this serial bank robber because at this point in time we have exhausted all of our investigative leads, and we want to put an end to his alleged crime spree before somebody gets hurt,” said Special Agent Christian Fierabend, supervisor of the FBI’s Violent Crimes Task Force.

The FBI is offering a monetary reward of up to $5,000 for information leading to the location, arrest, and prosecution of this individual. Anyone with information regarding his whereabouts should call the FBI Boston Division’s Violent Crimes Task Force at 1-857-386-2000. Tips can also be electronically submitted at tips.fbi.gov.