Up to $10,000 Reward Offered for Information Leading to Arrests

The Federal Bureau of Investigation, the Providence Police Department, and the Rhode Island State Police are seeking the public’s assistance by providing information about two men who were seen in the vicinity of the Providence Place Mall in Providence, Rhode Island, late Monday, June 1, 2020 and in the early morning hours of Tuesday, June 2, 2020 between 11 p.m. and 2 a.m..

Investigators would like to speak with them because they may have information relevant to the ongoing investigation into the vandalism and arson of a Providence Police Department cruiser.

The FBI is offering a reward of up to $10,000 for information leading to the identification and arrests of those responsible.

On the night of June 1st, two Providence Police Department officers responded to 1 Providence Place for a riot in progress. The officers parked and secured their vehicle, but were overtaken by a group of individuals throwing rocks, bottles, and other objects. Shortly thereafter, several individuals vandalized the cruiser, breaking its windows, and eventually setting it on fire.

A seeking information poster which includes newly released video and enhanced photographs of two individuals sought for questioning in connection with this incident can be found and downloaded here.

As seen in the video, individual #1 appears to be a light-skinned male, approximately 6’1” tall, with a shaved head and medium-to-heavy build. He wore a black jacket, white sweatpants, a camouflage mask, and was sometimes seen wearing eyeglasses.

Individual #2 is believed to be a light-skinned male with a black beard and slender build. He wore a black hoodie with white writing on the right sleeve, a black baseball hat with red writing on the back, and a camouflage bandana.

Anyone with information is asked to call the FBI at 857-386-2000. Tips can also be electronically submitted at tips.fbi.gov 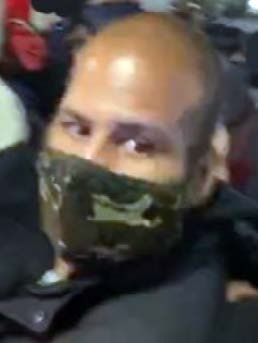 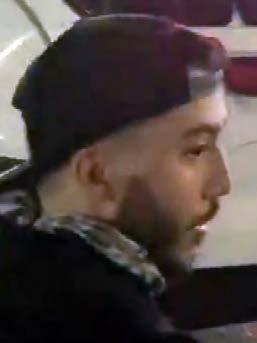 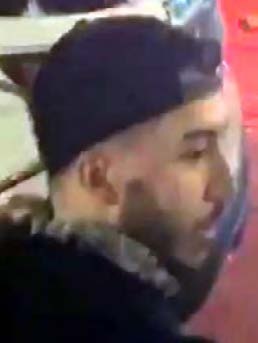