ANCHORAGE, AK—The FBI is engaged in a nationwide effort to build public awareness of hate crimes and to encourage reporting to law enforcement. This week, the FBI Anchorage Field Office launched a hate crime reporting campaign as part of that effort, which includes various digital, print, and radio advertisements across the state, and transit advertisements in Anchorage, Fairbanks, and Juneau. The Alaska effort ties with a national FBI awareness campaign that hopes to drive education efforts and increase reporting: “Protecting Our Communities Together: Report Hate Crimes.”

“All Alaskans should be able to thrive in our communities without fear that their skin color, what they believe, or who they love, makes them a target for violence,” said Antony Jung, special agent in charge of the FBI Anchorage Field Office. “The FBI hopes this campaign will encourage victims and witnesses to come forward, which will strengthen our ability to solve hate crimes, bring criminals to justice, and provide support to victims.”

The FBI defines a hate crime as a criminal offense against a person or property motivated in whole or in part by an offender’s bias against a race, religion, disability, sexual orientation, ethnicity, gender, or gender identity. The FBI is the lead investigative agency for criminal violations of federal civil rights statutes and works closely with its law enforcement partners in many of these cases, even when federal charges are not pursued. The FBI also works to detect and prevent incidents through law enforcement training, public outreach, and partnerships with community groups. 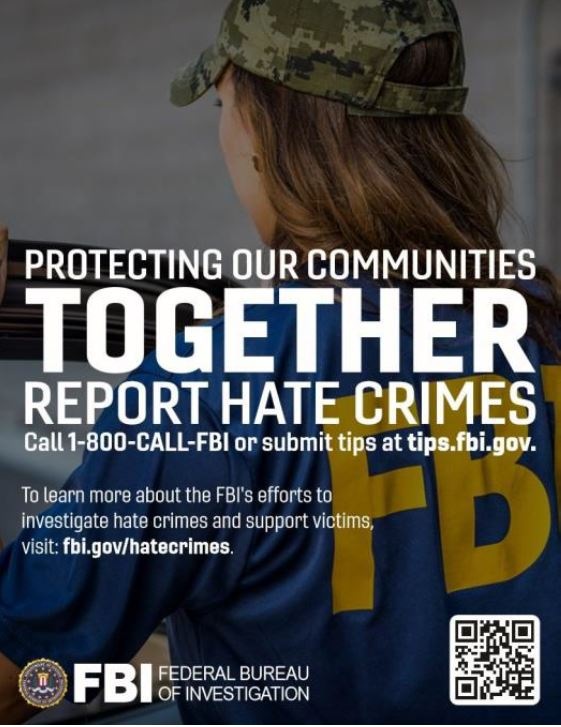