New Mexico included in FBI release of 2021 statistics on law enforcement officers killed in the line of duty.

According to statistics released by the FBI on Monday, two New Mexico law enforcement officers were included in the 129 who were killed in line-of-duty incidents in 2021.

Of these, 73 officers died as a result of felonious acts, including New Mexico State Police Patrolman Darian Jarrott, who was shot and killed while conducting a traffic stop near Deming on February 4, 2021.

Another 56 officers died in accidents, including Artesia Police Department Corporal Thomas Frazier, who died in a vehicle crash on May 21, 2021.

“Law enforcement officers risk their lives every day to keep Americans safe,” Special Agent in Charge Raul Bujanda of the Albuquerque FBI Division said. “Some of these brave men and women never make it back home to their families and loved ones. Their sacrifice deserves our respect and eternal gratitude.”

Comprehensive data tables about these incidents and brief narratives describing the fatal attacks were released in the Law Enforcement Officers Killed and Assaulted (LEOKA) portion on the FBI’s Law Enforcement Data Explorer (a subset of the Crime Data Explorer): https://crime-data-explorer.app.cloud.gov/officers/national/united-states/leoka

The following is a summary of the report:

Seventy-three officers were feloniously killed in 2021, an increase of 27 when compared to the 46 officers who were killed as a result of criminal acts in 2020.

The 73 felonious deaths occurred in 28 states, the District of Columbia, and Puerto Rico.

Officer Profiles: The average age of the officers who were feloniously killed was 39 years old. The victim officers had served in law enforcement for an average of 12 years at the times of the fatal incidents. Of the 73 officers:

Circumstances Encountered by Victim Officer Upon Arrival at Scene of Incident. Of the 73 officers feloniously killed:

Regions: Felonious deaths were reported in three of the four U.S. regions.

Circumstances: The 56 officers accidentally killed died in a variety of scenarios:

Regions: Accidental deaths were reported in all four U.S. regions and in Puerto Rico. 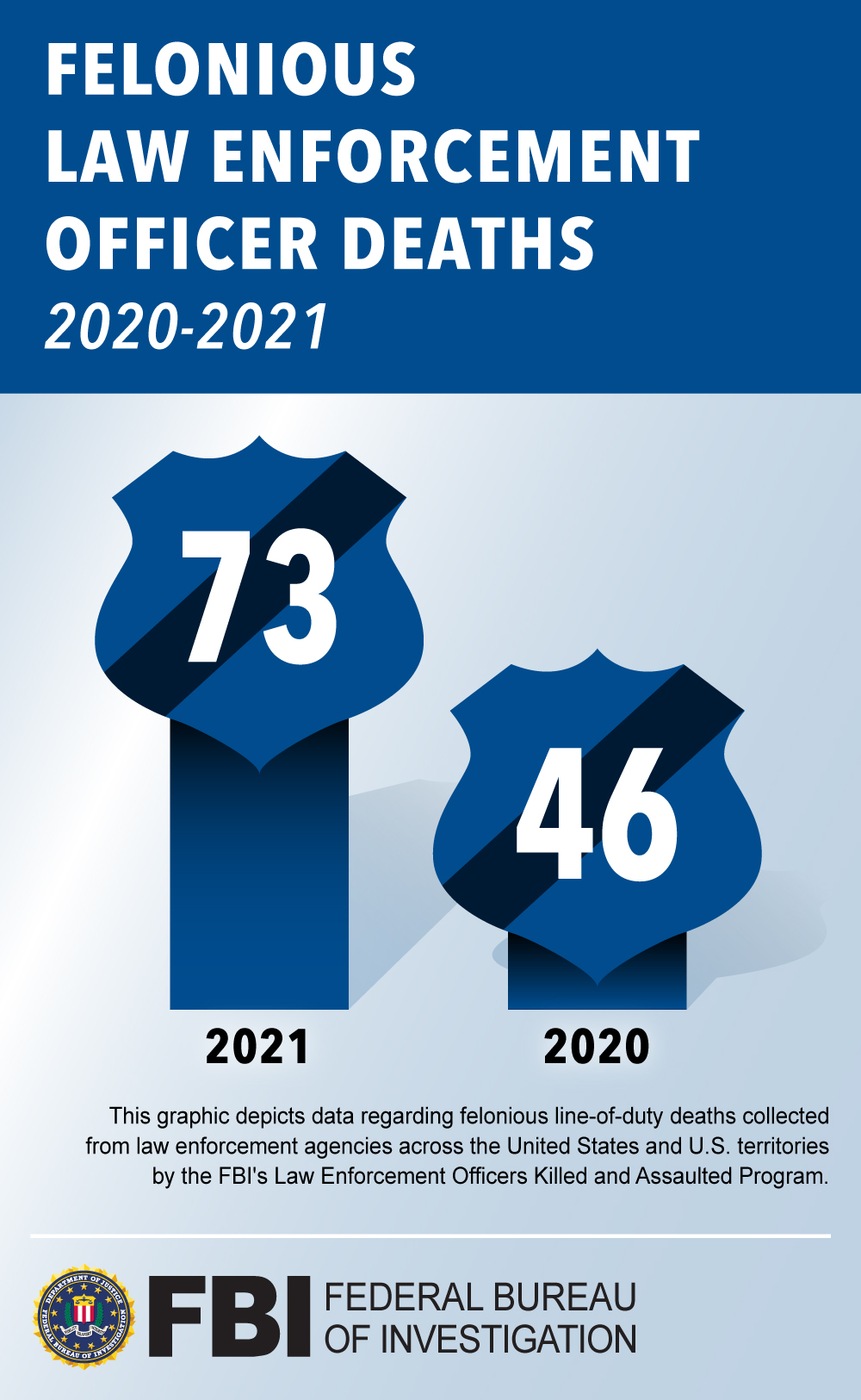