Brandon Describes His Route to the FBI

Brandon Describes His Route to the FBI 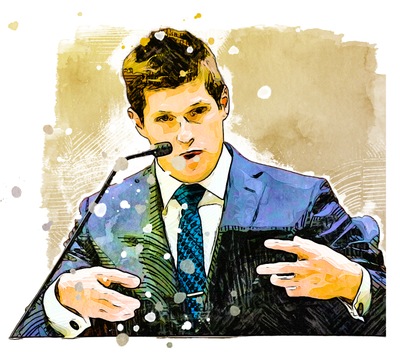 The events of 9/11 compelled Brandon to buckle down in college and focus on how he could make a contribution. Today he’s an expert on forensic DNA and is planning to become a special agent.

I was enrolled freshman year at Penn State University.

I knew I wanted higher education, I just didn’t know really what I was going to do. And, I can vividly remember the moment, and then the days, and then the weeks following September 11, and I knew that I wanted to be part of preventing that ever happening again. What September 11 did for me was it gave me that new direction. And I started to think about, “How can I start making a difference? What do I have to do to protect people and prevent something like this from happening again?”

And so, in a way, that tragedy got me looking into what agencies I could be a part of. And it became pretty clear shortly after 9/11 that the FBI was going to take a lead in counterterrorism. And so that meant that as a 20-year-old going first year into college, I needed to start thinking about making better social decisions. Maybe that meant not going to a party if friends were going to go there because there were going to be illegal drugs. It made me ensure that I was going to be on the correct side of the law. It made me ensure that I was going to shoot for the highest grades possible, because I knew that the FBI was going to require that. And the one way that I could stand out was making sure that I had the right education and I was doing well at it. And then as time went on and I started to fine tune of what I wanted to do, I knew the FBI was looking for expertise in the STEM fields. And so, I pursued biology from Penn State University.

I got my master’s degree in forensic DNA from Penn State University also right after my undergraduate studies in biology. Miraculously, the FBI DNA Casework Unit at the Lab Division in Quantico was having a hiring event. And I put in my application and everything that I had worked for from that day, from September 11—making sure my grades were the best that they could be—all of that kind of came down to that single day where I clicked that button and I applied.

I started by FBI career right out of school in forensic DNA operations in the DNA Casework Unit. And there, I got my feet wet as a technician, where I was physically handling and processing DNA evidence that was coming in nationwide from investigations all over the country. And I worked my way up in that unit. After three years of being in that technician biologist role, I then went under two more years of training to be considered what I am now today as a subject matter expert witness in forensic DNA and forensic serology for the FBI.

And that has been just this incredible journey on processing and managing and directing FBI casework from a forensic examination from the forensic DNA perspective. And to date, I have directed and managed and reported for over 600 cases for the FBI. And I’ve also testified over 20 times, and that’s brought me all over the country, the federal level, the state level, also U.S. territories, including Guam.

And after 11 years of doing that, I finally decided that I want to keep going and I want to do more. And that’s why I applied to be a special agent in the FBI. And I am very happy to report that I am at the back end of that process. I was conditionally accepted. I received a conditional offer in May of this year, and I am now waiting my background and hopefully I can continue my career with the FBI now as a special agent.