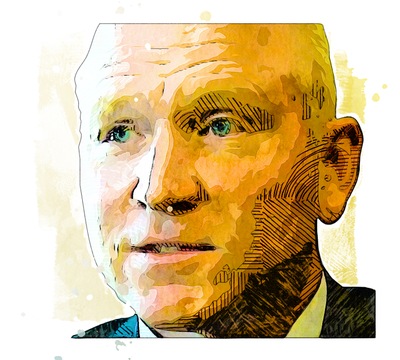 Special Agent J.A. was working on a truck hijacking squad in Brooklyn-Queens and was attending a meeting for hostage negotiators in New York City on September 11. He led the investigation of two suspected co-conspirators in the weeks that followed.

My first reaction was some cowboy in a Cessna fooling around bounced off the building.

But when I looked out onto the street I saw people running--running--north on Broadway.

And I always say it reminded me of a monster movie from when I was a kid, like a dinosaur or something out of ... creature was chasing people up Broadway.

But when I went out to Broadway and started looking south I saw ... this is not going to be good.

I wasn't looking at the towers when they started to collapse. I was engaged in conversation when you just saw people's eyes get really wide. And everybody just started to say it's coming down.

I didn't know how the towers were collapsing. I imagined the towers were going to collapse to our position. So I saw an elevator. All elevators have a steel frame around the elevator. So I went and I just stood in the elevator, you know, closed elevator. And I remember saying to myself I don't know if this is going to be good or bad because if I get trapped in here it's going to be a long time to suffer in this little void. And I remember saying I hope this doesn't hurt.

Because it was the Twin Towers I knew that they were coming back to finish what they had started in '93.

And I just couldn't imagine anybody else doing that, and using aircraft and doing such a spectacular type of hit other than al Qaeda at that time, especially after being in Nairobi and seeing what they were capable of doing over there.

After the '93 bombing, I always in my minds eye tried to figure out if they had succeeded in doing what they wanted to do--collapsing one building into the other.

And I always tried to imagine what it would look like if they had succeeded in '93.

And, unfortunately, I got a chance to see what it looked like in '01.